The biggest match of the weekend and one of the biggest matches this season has ended, a clash between the Spanish leaders before the game and defending Spanish champions Barcelona.Both sides fought valiantly for supremacy, with Valencia the better team in the first half and Barcelona the better team in the second half. The game didn't have too many chances for such a big encounter, but there were several tries on both sides that were very dangerous.
The game started in a slow and careful manner, neither team pressing too much and respectfully sizing up the opponent, the first 15 minutes of the match were fought in the middle of the field, but Valencia slowly started to take things under control. Pablo Hernandez was particularly active on the right wing and in combination with Ever Banega and Soldado managed to create few mini chances that weren't converted.

Barcelona best player in the first half was Xavi, with most of the dangerous passes and moves coming from him, while his team mates like Messi, Iniesta, Villa and company were struggling to find their feet. Apart from few mini chances on Barcelona side they weren't too convincing either. 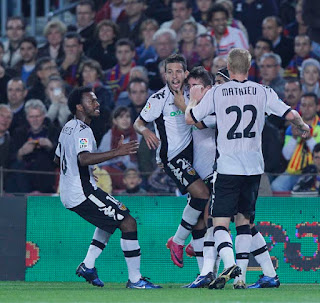 Than in the 37th minute after a good run from Jeremy Mathieu on the left side, he avoided Dani Alves, managed to get in the Barca penalty area and pass the ball to Pablo who slotted the ball in the net and it was 1-0 for Valencia.
Until the end Pablo had another brilliant chance after a superb pass from Soldado, the goal was almost fully open he managed to just shoot straight in the goalkeeper and the brilliant chance for 2-0 was ruined. If Pablo managed to score Valencia would have won the game right there and then, unfortunatelly it wasn't to be.

Anyways Valencia were the better team in the first half, keeping up in possession with Barcelona, even going 54%-46% in our benefit and generally playing better than the opponents.

In the second half everything changed, not 3 minutes after the start of the second half, all the defenders were disorganized and sitting around doing nothing, when Xavi released a great pass to Iniesta and no one even got after Iniesta as they all raised their hands calling for offside where there wasn't any even the slightest. Iniesta calmly slotted the ball past Cezar who couldn't do anything to prevent the goal.
After this early goal Valencia mentality changed, the players became scared, started playing more defensively, started making mistakes and the passing became just poor.
Not to take anything from Barcelona, who were really pushing hard in the second half, but our players can only blame themselves for this loss.
Anyways after several chances in which Villa and Messi either missed or had been denied by Cezar came in Puyol out of all the players, who jumped the highest after a good cross from Xavi and headed the goal in our net. 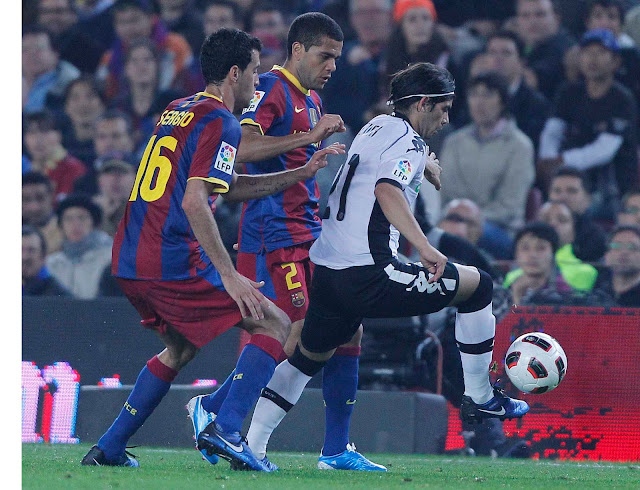 Unai Emery tried to do something as he brought in Aduriz, Mata and Vicente in for Soldado, Banega and Mathieu, but it was too late too little. In fact the better option would have been to bring in Tino Costa in for Albelda as the veteran was really struggling in the second half. Even Tino Costa for Banega would have been a better option, since Mata really hasn't proven himself in the position he was placed and with his small stature he couldn't do anything, even though he tried.

Valencia did push really hard in the last 15 minutes of the match, but Barcelona took a defensive stance and managed to finish off the game without too much trouble.

Valencia CF: César; Bruno, Navarro, Costa, Alba; Albelda, Fernandes, Banega (Min. 66 Mata); Pablo, Mathieu (Min. 83 Vicente), Soldado (Min. 62 Aduriz).
Player ratings:
Cezar 8 - Reliable as always, made few saves to deny Barcelona scoring even more goals, couldn't do anything about the two goals.
Bruno 6 - Great in the first half, but almost terrible in the second, several times out of position and did not provide assistance to Pablo in the second half.
Navarro 5 - Great in the first half, but came a different player in the second, his fault for both goals.
R. Costa 7 - He had several great tackles to deny Barcelona a chance and could not be blamed for the two goals.
J. Alba 6 - Same as Bruno, partially better than him in the second half, but also partially at fault for the first goal.
Pablo 7.5 - The most lively player on the field for the whole match, scored great goal and would have got a 10 if he scored from the great chance he had 3 minutes after his first goal.
Albelda 5 - Good cover and passing in the first half, but really bad in the second half, he became frustrated and couldn't do anything right.
Fernandes 8 - Constant menace for Barcelona, spread the ball great, controlled the midfield and involved in most actions, he was not so influential in the second half, but still one of the best players in the field.
Ever Banega 6 - Obviously a bit rusty after such a long injury and not in full form, he did had several good moments though and always made himself available to receive the ball.
Mathieu 7 - Great first half from Mathieu, provided the assist for the goal and always threatening when going forward. Had few good runs even in the second half, before being substituted.
Soldado 5.5 - Had a decent first half, good off ball movement, but could not find himself in better position to intercept some of the crosses.
Subs:
Aduriz 5 - Didn't provide anything Soldado didn't provide already, could not get in the game.
Mata NA - Not enough time
Vicente NA - Not enough time
Posted by SlickR at 9:14 AM
Email ThisBlogThis!Share to TwitterShare to FacebookShare to Pinterest
Labels: match report, results
Newer Post Older Post Home