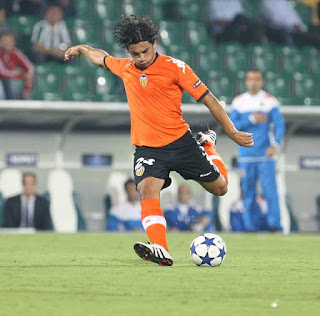 Tino Costa and Mehmet Topal were in the center of the field, Topal replacing Albelda and Tino Costa covering for Ever Banega, and both players had much to prove.
The game started in a pretty erratic fashion, with neither team managing to take firm control of the match. The first chance came for Bursaspor who had a shot on goal. As time passed Valencia took more control of the match and started playing really well.
In the 16th minute Tino Costa fires a powerful shot with his left foot and ended in Buraspor net, the goalkeeper had no chance.
After the goal Valencia got really comfortable and had several runs towards Bursaspor goal, but no firm chance arrived.
41st minute Valencia double the lead and again Costa is in the thick of it as his beautifully-struck free-kick hits the upright. With Dimitar Ivankov well-beaten Aritz Aduriz swoops to head the rebound into the empty net.
Joaquin was quite active on the Right side and had couple of runs till the end, but nothing could come out of it. 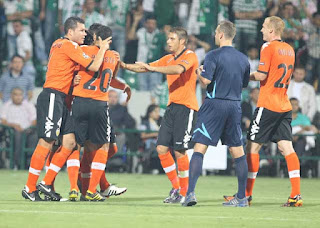 The second half started much in Bursaspor favor, clearly determined to level the score. They were very dangerous and were having rins towards Cezar goal constantly, but just when it seemed they are about to score Pablo Hernandez scores in the 68th minute to tripple Valencia's lead. After a mess in Bursaspor 16th meters field the ball luckily came to Pablo who pushed the ball towards the goal and it went in.
From the third goal on it was mostly Valencia, who although did not have much possession had numerous chance to increase the result.
In the 73rd minute Soldado came in Aritz Aduriz who finished his job with a well taken header for the second Valencia goal.
Joaquin had several chance to score, but unfortunately he didn't manage to score and he had really good chances, particularity a smart back-pass from Pablo to find Joaquin and this one only managed to shoot wide.

In the 76th minute in a half counter attack Chori unleashed a well timed through ball towards Soldado who than managed to score with ease for a result of 4-0 for Valencia.

Than came several substitutions Mata in for Chori and Manuel Fernandes for Tino Costa and the match slowed down and both teams just waited for the end to come.

In the end Bursaspor 0-4 Valencia CF.

My prediction felt short in the water, but I'm happy since Valencia trashed Bursaspor and played a great match.

Player Ratings:
Cezar - 6: Didn't have too much to do, but great when called upon.
Bruno - 6: Great in defense, but did not support Joaquin well and made a horrible lapse towards the end of the match.
Navarro - 6: Good display but still needs improving.
R. Costa - 6: Same as Navarro, good display but will need to up his game for the likes on Manchester United.
Mathieu - 6: Good at defending and good going forward, but did have some problems at times.
Joaquin 6.5: Would have had better score if he had taken his chances, otherwise he had a great game.
Topal - 6: Not the brightest of performance and pretty anonymous, but did well to support the defense.
Tino Costa - 8.5: Great performance and the man of the match tonight. He scored the first goal with a powerful 35 meters shot and hit the cross-bar from a free kick which lead to the seconds goal. Had good vision and passing and will be feeling great about his performance tonight.
Pablo 7.5: He was quite isolated in the first half but improved a lot in the second half. Was moving everywhere, combined well with the rest, scored a goal and had a wonderful backpass to Joaquin.
Chori - 7.5: Inspiring game from Chori. He clearly has some ways to go still, but it will come with play time. Was involved in a lot of Valencia attacks, opened spaces for his team mates and had the assist for the forth goal.
Aduriz - 7.5: Great movement and placement, took his his chance with a good header after Tino's free kick hit the woodwork and the ball bounced to him.

Subs:
Soldado - 7.5: He came in and scored a goal, what more could anyone asked. And it was a well taken goal and had the perfect sense to avoid an offside ruling leading up to his goal.
Mata - 6: Didn't achieve anything for the time he had, except one good cross to Soldado. Should be more explosive and effective if he is to keep his starting place.
Manuel Fernandes - 4: Came in the last minutes of the game but did not put a foot right in the time he had. Should have taken command of the center field and dictate play but he got lost.