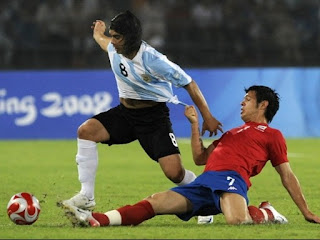 Miguel Brito and Manuel Fernandes were called in the Portugal national squad few days ago as well as Hewdges Maduro for Holland national team. Maduro played a good game for Holland in a central defensive role and seems he's done enough to get another call up.
Ricardo Costa will sit out the first Portugal qualification match, as he is under suspension for the red card he got during the Fifa World Cup against Spain.
Mehmed Topal was also called on international duty for Turkey, who's coach is former Valencia coach Guss Hidding.
Ever Banega and Mata are also called up for Argentina and Spain respectfully and will actually play a friendly match against each other on 07.09.2010 and will be played in "Monumental" stadium, Buenos Aires.

In other news Zaragoza and Valencia reached an agreement regarding the Zaragoza debt to Valencia.
The new agreement postpones Zeragoza's payment for one more year. Zaragoza owe Valencia money for the purchases of Aimar and Arizmendi, two of the once gigantic players for Valencia.
Zaragoza's president thanked Valencia CF president Manuel Llorente for his understanding.
Posted by SlickR at 12:56 AM
Email ThisBlogThis!Share to TwitterShare to FacebookShare to Pinterest
Labels: news
Newer Post Older Post Home