The where are they now of the Lim era part 3: attackers

The last part of the series on everyone who played in a competitive game for the first team and then left. Part one: here and part two: here.

Iban Salvador. Had a “blink and you’ll miss it” cameo, playing the last 10 minutes of the Copa 2nd leg against Barcelona in 2016. By chance that was also the last game of 3 others on these lists: Diallo, Zahibo and Villalba. As we’d lost 7-0 in the first leg, how many of us watched that? Released that summer, he’s been with a few clubs since. Valladolid, who loaned him to Murcia and Leonesa, before he transferred on a free to Celta reserves. After a season there, he joined his current club, second level Fuenlabrada, in 2019. He has at least broken into the Equatorial Guinea national team and scored the only goal in a crucial African Nations cup tie against Libya last November.

Vinicius Araujo. Always looked like a mid-season panic buy, with Valencia playing 3.5 million to Cruziero for him in January 2014. After 6 unsuccessful appearances, a series of loans followed as Valencia tried to recover some cash. After the loans at Liege, former club Cruziero and Brazilian club Sport didn’t work out, he made a surprise brief return to Valencia. Played in the dead rubber second leg of the Copa at Celta (after we’d lost the 1st leg 1-4) and even scored his only Valencia goal. That was his swan song. Loaned to Huesca a week later and joined Zaragoza on a free later that year. An unsuccessful season there meant he returned to Brazil for a similarly unsuccessful stint with Vasco, who loaned him to Avai. He finally saw some success last season at Montedio Yamagata of the Japanese second division. He’s certainly travelled around.

Munir. Joined on loan in summer 2016 to cover Alcacer’s departure. Did finish as joint top scorer with Rodrigo, but 7 goals in 25 games wasn’t enough for Valencia to even consider the 12 million option. After returning to Barcelona he hardly played and joined Alaves on loan where the prat celebrated scoring against us in the Copa as though he’d won the world cup. Moved permanently to Sevilla where he’s established himself well.

Alcacer. A player who was developing well into the talisman of the Valencia side so it was a sickener how he left and how badly handled it was. A chaotic exit with Lay Han Choon being undermined by her boss, who first told her he wasn’t leaving and then negotiated a sale to Barcelona after that. Most well know his history so I won’t dwell on it. Controversial exit. Struggles at Barcelona where he was behind Messi, Suarez and Neymar. Did well at Dortmund, now also doing well at Villarreal. A sad tale of the mismanagement and chaos at Valencia summed up in one player.

Negredo. Valencia’s record signing at the time for 30 million. How would The Bomb do? He lived up to his name, but not in a good way, as a financial bomb. He’s subsequently said that joining Valencia was a mistake and he’ll not find any Valencia fans arguing with him. A loan season at Middlesbrough proved unspectacular and he moved to Besiktas in Turkey but eventually lost his starting place. Their financial problems meant he lasted only a season. Two prolific years at Al-Nasr in Dubai followed before he returned to Cadiz for this season.

Nani. After a couple of middling seasons, we tried and failed to recover cash with a loan to Lazio. He was then released to return to Sporting Lisbon. After a single season there joined Orlando in the MLS in 2019 and is still there.

Zaza. Who can forget this guy? 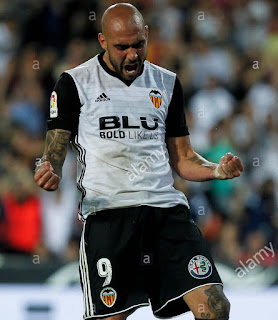 Eyebrows raised when he was first linked with us. Despite his flaws, left a positive impression at the Mestalla and had a real purple patch, equalling the most-games-in-a-row scoring record. That turned out to be a blip as his goals dried up, with just 3 goals in his last 24 games. To the consternation of many fans, he was moved on to join Torino for 14 million. In hindsight, it looks like a wise decision as his scoring rate hasn’t improved: just 15 goals from 70 games in his three seasons there.
Vietto. After being linked with Valencia for a long time (we had a buy option on him as part of the signing of DePaul, but didn’t use it) finally joined on loan in January 2018. Started spectacularly with a hat-trick in his second game, a Copa win over Las Palmas which included a goal from the halfway line. Just 2 goals in the next 17 games followed, we declined the 16 million option and he was loaned to Fulham, managing just a single goal in 22 games. Then joined Sporting Lisbon, who he’d rejected to join us. They sold him for 7 million to Saudi club Al-Hilal last year.
Batshuayi. After 3 decent seasons at Marseilles, Chelsea and Dortmund, looked a great loan pick up. What could go wrong? Everything. He seemed sluggish, overweight and off the pace. He seemed to unbalance the team and after his loan was cut short, results flowed for Valencia. Looked like he’d got his revenge by scoring a late winner for Chelsea at Ajax in our Champions league group but it wasn’t to be. Loaned to Palace where his 6 goals in 26 games are hardly setting the world on fire.
Rodrigo. A slow burner. Looked like a useless and expensive bust in his early seasons where he was misused on the wings. Began to show some form in the Ayestaran-Prandelli era where he moved to central striker in a 4-3-3 but then got injured. It was only with the arrival of Zaza and switch to 4-4-2 that he began to produce. His linkup play between midfield and attack are sorely missed. Just 3 goals in 15 games for a Leeds side that have been struggling recently.
Santi Mina. After a slow start, won the fans over with a super sub role producing goals, though I doubt anyone misses the LeBron James celebration which he overused? Has hardly excelled at Celta since returning there. Marked his 50th appearance since rejoining Celta this week with a goal but that’s only his 2nd of the season and 8th overall. Does have 3 from 3 in the Copa against lower division sides, but he’s well below the potential he started to show at Valencia.
Rafa Mir. Along with Danilo Barbosa, the poster child for critics who complained that Mendes had too much influence at Valencia. His highly controversial selection for a crunch Champions league game at Zenit arguably sealed the end for Nuno, who resigned the game after. Mir's relationship with the fans soured and after an abortive attempt to join Real Madrid, rejoined Nuno at Wolves in the second level but only got 4 games. Has since had loan spells at Las Palmas, Nottingham Forest and Huesca, with only his last season with them in the Spanish second flight really impressing.
Posted by John Valenciacf at 11:56 AM
Email ThisBlogThis!Share to TwitterShare to FacebookShare to Pinterest
Labels: feature, Players
Newer Post Older Post Home