News at Valencia hasn't been great in recent times, with ongoing instability in the club. Today the club announced better news. Yunus Musah has announced a 4-year extension to his contract, tying him to the club until 2026. 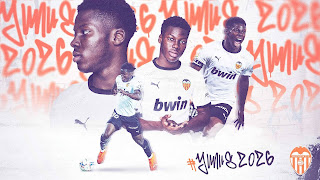 Musah's emergence has been one of the more positive notes to emerge from this season, during which he earned a first international cap for the US national team, though he remains eligible to play for England as well. Unfortunately, none of the sources give his release clause. With Gabriel Paulista recently getting Spanish citizenship, that opened the way for another non-EU player.

Valencia drew Tercera División (fourth level) side Terrassa CF in last 64 of the Copa Del Rey and the date and time have now been confirmed for the midweek after next on 15 December at 19:00 CET. 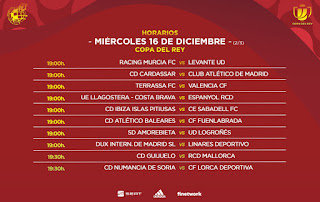 Terrassa have never played in the top flight and it's been 15 years since they were even in Segunda. While that makes it sound easy on paper, it's a one-leg game away and Valencia have had a few nervy moments in recent times against lower level clubs in the Copa, so hopefully the main enemy, complacency, can be overcome for this one.
Posted by John Valenciacf at 7:11 PM
Email ThisBlogThis!Share to TwitterShare to FacebookShare to Pinterest
Labels: Copa del Rey, Players, squad
Newer Post Older Post Home