Javi Gracia gave his first press conference after a competitive game following the Levante match. I thought it would be interesting to see what he said and what it tells us about the new guy. The video is here in Spanish. 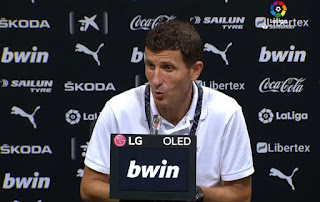 First, here's a translation of what he said:

(ASKED TO GIVE AN OVERVIEW OF THE GAME.)

"Yes, it is true that the game had different periods. I think the opponent started better, they dominated more in the first half. Despite that dominance and them being better with the ball as well, I think reaching the break with that 2-2 kept us in the game, also the result of the goal from set pieces and the effort that the team has made despite not being fluid and being unsettled. Then, in the second half, it is true that , little by little and without starting the half very well, we were growing and improving with the passing of the minutes. It was the work of everyone, those who started that the game matured well and those who entered, who were decisive in achieving the final result. Today's result is down to the whole squad of 23 and I think it has been reflected that way. I leave with good feelings in terms of the physical condition that allowed us to fight until the end, in a week where there have been many problems and many absences. But in spite of everything, I think we endured very well and we have managed to prevail in that section in which the two teams were already lacking strength ".

"I am very happy with the victory and I would like to highlight those who are there, those who have made this effort, more than the absences. I already spoke about it the other day about it and I prefer not to do it again. "

(ISN'T GUILLAMON BETTER PLAYING THE BALL OUT FROM THE BACK?)

"I agree that we were not fluid with the ball and that is why we conceded the first goal in the way we conceded it, right after we started. It is true that Guillamón gives us that, but each player has a series of virtues but when choosing the eleven or balanced teams, I try to find what I think is best for all phases of the game, not just for the start playing out from the back. Without wanting to detract from the player, I think he is a very valid option and that he will show it throughout the season. But it is the first game, I think those who have participated have done very well and I want to share this victory with all of them."

(THE NEED FOR REINFORCEMENTS?)

"Today's result does not change the team's requirements. The situation is the same, it is what it is, but it is true that it shows us that the players we have, despite their youth, are capable of competing in the First Division. Cases like Yunus Musah, who made his debut the way he did at 17. The case of Vicente Esquerdo, starting for the first time in a league match and competing at the level that he has done. That makes us see that we have our virtues in this squad. Now, the analysis we have made of it from my point of view, I think they have already been done and I think it is not good for anyone to be constantly repeating it, especially after a game like the one we played today. "

"I think that, of course, the credit for what players like Yunus do, belongs to the player himself. There is the maturity of a player. Despite his youth, he has shown unusual maturity and, enduring the time he has been on the field, with the level of demand that he has done, it is something to be applauded and we need to take care of him so that he, in the future, continues to grow and contributes much more to Valencia ".

"I think the result should not hide the things that we did wrong. I think that, defensively and especially in that first half, we were very fragile and very weak, which we weren't in friendly matches. I didn't feel that was an issue in training. Therefore, it is something to study, to continue working on and to try to ensure that in the next matches it does not happen to us. I hope we will score four goals in all games, but it will be difficult. We have to try to be a team that concedes less, I already said it in my presentation ".

Overall, I'm impressed with his first press conference after a La Liga game. He seems to read the game well. It's particularly good that he doesn't try to pretend that everything is okay. Admitting weaknesses is a sign of strength. Many previous managers (Celades, Marcelino, Pako etc) would usually not admit their faults in the press conference. Regarding potential signings, he realises he has made his point and therefore wisely is not going to push it. It's early days with Gracia but the sensations so far are positive.

Lastly and on another topic, I finally got around to updating my spreadsheets, which cover appearances, goals, subs and cards for the period from 2015 to present. Here is the link.