Valencia have just made official the appointment of Javi Gracia, who signed a two-year contract. 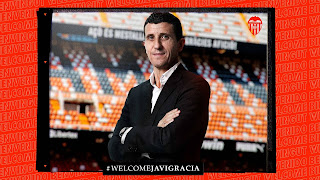 The question is, will he be able to see out the two years? Let's start with the positives. Gracia is Spanish and has extensive experience both in La Liga and abroad and therefore speaks Spanish and English as well as basic Russian. He's not a Celades-type, fumbling his way round for the first time in club management.

Gracia's time in management goes back to 2004. He started with Villarreal youth and then lower division sides before spending a year in Greece. On returning, he was able to get Almeria promoted to the top flight, managed relegation strugglers Osasuna, then helped Malaga to eighth and ninth. He then ended up abroad again, having an underwhelming time at Rubin Kazan before moving to England to manage Watford who had fallen from fourth to tenth under his predecessor. Though he was unable to substantially improve results, with the team finishing 14th, the club saw enough to stick with him and the second season was a good one, with the club finishing 11th, their highest ever Premier league finish, and reaching their first cup final in 35 years, where they were crushed by Man City. After a slow start to the 2019-20 season, the trigger happy owners of Watford fired him, replacing him by Quique Sanchez Flores, who would be sacked at the start of the year, with his replacement Pearson also sacked before the season's end, none of which helped as Watford were relegated. At least Gracia has experience of working under erratic owners.

In terms of playing style, he generally goes for 4-4-2, often based around a double pivot, and with, at times, inverted wingers, meaning that the style often resembles 4-2-2-2. His teams were known for defensive solidity and low possession, often with two banks of four. Late in his time at Osasuna, fans turned against him, finding the playing style boring. Sound familiar? That said, he's been known to mix it up at times, also playing a 4-3-3, 4-2-3-1 and a back three. At Watford his teams thrived on soaking up pressure and hitting on the counter.

Ultimately, I find it an underwhelming, but not surprising choice. The foolishness of the club's choices in the 2019-20 season means that top managers were not exactly queueing up outside Mestalla. He's one of the better choices from a limited field and does at least bring experience, including that of managing on a tighter budget. I'm not overly optimistic about this one. He strikes me as being a manager more for a plucky underdog team battling to make the top half, not a team like Valencia, but let's see how he does.