The break is over and now the team is back for the final game of the first half of La Liga. With the player's rested and some recovered for this part of the season, the team will be optimistic and hope ot get a win. However, there is no doubt that some mind will wander to Wednesday's Spanish Super Cup game against Real Madrid.

Valencia's final game before the break was a 1-1 draw away from home to Valladolid. Valencia would actually go down a goal 7 minutes from the full-time whistle. Manu Vallejo, who had been introduced as a substitute in the second half would rescue the point in the fourth minute of additional time, getting on the end of a Ferran cross across goal to the far post.

Eibar played at home in their last matchday and beat Granada in convincing fashion, scoring 3 goals and keeping out Granada for a clean sheet. Granada sit higher than them in the table so that an even better result.

Valencia come into this game at 8th position in the table with 28 points, 4 points away from the Champions League spots. Eibar, on the other hand, are two spots away from the relegation spots (16th), gathering 19 points from 18 points so far in the season.

In terms of the transfer market there is yet to be any news any player transferring in or out of the club. In related news, we know that Lato has ended his loan term in the Netherlands with PSV Eindhoven and has returned to La Liga for another loan spell, this time with Osasuna. He was barely getting any game time and was harshly criticized by the coach with some reports claiming that he was sent to play with their B-team as punishment. Furthermore, Paulista is on his way to claiming Spanish citizenship which would allow him to play for the Spanish national team should Luis Enrique want him to play. This is made possible since Brazil has not called him up. What really matters here to Valencia is that this will free up a non-EU spot on the team, meaning that Valencia can sign a player from a country not in the European Union, opening up even more possibilities for signings from those markets.

The squad looks a lot more complete now that some players were recovered during the break. Cheryshev rejoined the team during the last matchday. For this game, Cillissen, Gameiro and Maxi Gomez have all made their returns to the squad list.

The unfortunate news it that Manu Vallejo has moved the other way into the injury list alongside KangIn, Guedes, and Piccini. The later is expected to return in February while the former two are expected back sometime this month. Hopefully, we get to see improved performances when Celades has all his pieces to play. 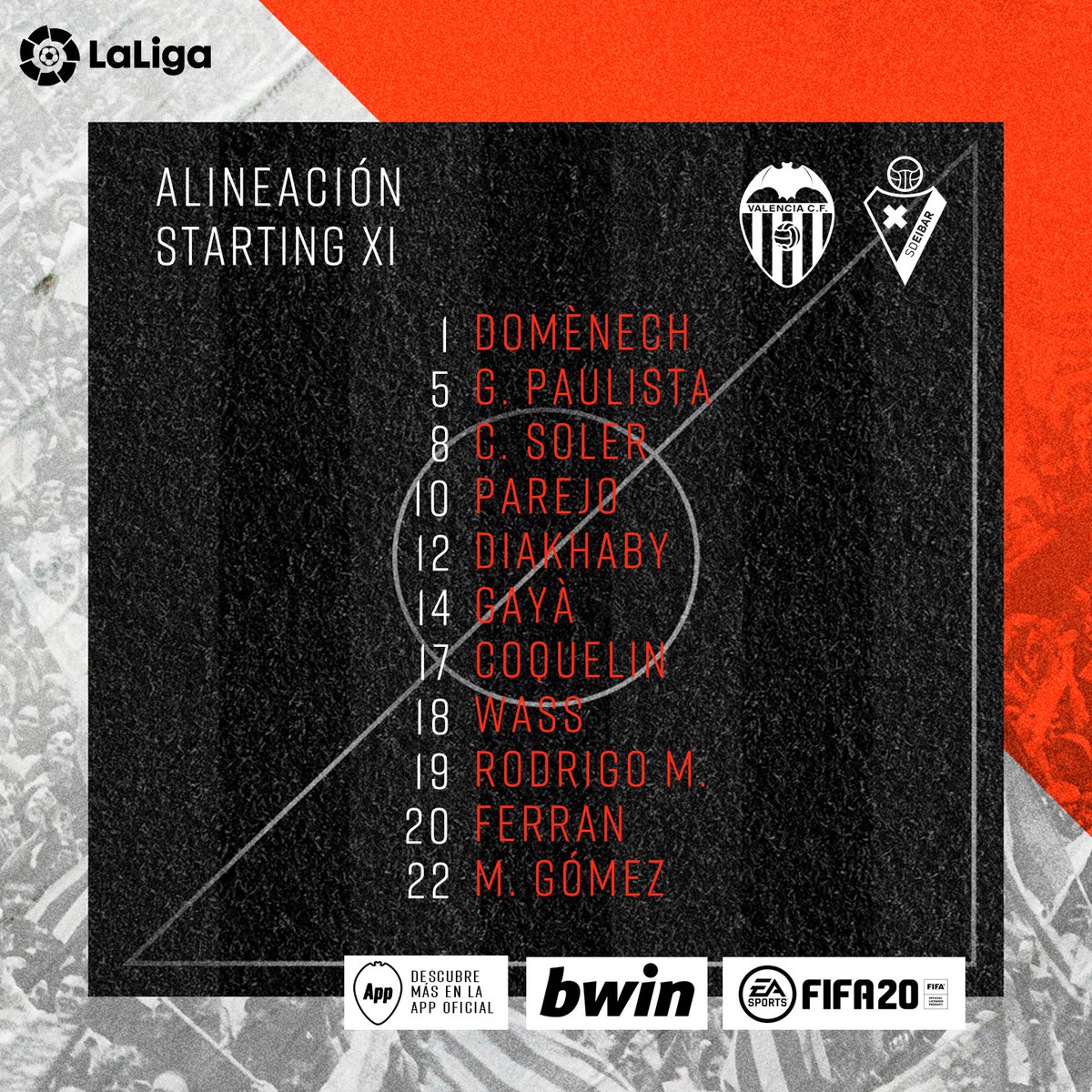 Despite Cillissen's return, Domench is still given the start in goal. In defense, Garay is rested for Diakhaby, probably with an eye to the Super Cup game. Finally, Maxi Gomez returns to start.

4' - Early chance for Valencia following a corner. Parejo delivers to the center of the box where Maxi Gomez gets enough on it to find Rodrigo in space but his shot is fired straight at the keeper. The linesman raises his flag for offside anyways.
6' - Another chance for Valencia, this time from Ferran. He fires across goal but the shot is wide.
7' - Eibar get their own chance after Diakhaby loses out in an aerial battle, the play is offside so the shot into the goal does not count. This was too close for comfort however.
15' - Parejo with a corner straight to the head of Rodrigo but again the header is off-target. Heading is not his forte.
23' - Best chance of the half so far. Ferran passes to Rodrigo in a central position who plays it first time to find Maxi Gomez's run. Maxi Gomez crosses across goal in an attempt to return the ball to Rodrigo at the far post but Rodrigo cannot make contact with the ball.
27 ' - GOAL VALENCIA! 1-0! Maxi Gomez with the header on his return. A quick string of passes. Rodrigo to Soler on the left, Soler switches play to the other flank. Ferran receives and plays it back to Parejo who finds Wass's run. Finally, Wass with a well-timed, accurate to find Maxi Gomez. He was marked but towered above his marker and heads it down into the bottom-right corner. Valencia have been the dominant team and deserve the lead.
37' - Pedro Leon with a shot from distance to the far side of goal but Jaume is equal to the effort, parrying it away from goal.
43' - Ferran appeared cornered at the opposition corner flag but he goes through both defenders with some great skill, attempts a cross but it's blocked.

HALF-TIME: Valencia clearly look the better seem far, a good first half. The period of rest seems to have a visible improvement on the players. They are full of energy and move the ball quickly and directly to the opposition goal. The lead up the goal was an example of a string of these quick passes that ended with well-delivered cross from Wass to Maxi Gomez. It's great for him to get a goal on his return from injury as we really need him to be back to form quickly for upcoming games. Maxi has been involved in another chances as well, finding both Rodrigo and Ferran with through balls. Unfortunately those chances did not result in goal but that doesn't take away from his good performance this half. Wass had superb delivey on the cross to set him up, more of the same and Maxi should score plenty more in games to come. Looking forward to the second half where the team usually play better.

50' - Eibar with a chance from the corner. Jaume punches the delivery into the head of an Eibar player and towards goal. It hits the cross bar and deflects back out. What a way that would've been to concede. Luckily it stays out.
55' - Wasted opportunity for Valencia, Soler receives the ball and is in a 2 v 1 situation against the Eibar defender with Rodrigo in support. He cannot see a good pass for Rodrigo and takes a few touches, finds Ferran but by then the defense had reformed to deal with the effort. Corner kick results.
56' - Ferran is first to the corner with a glancing header across goal but its narrowly wide.
57' - Rodrigo faces off with an Eibar defender in a race on the left-flank for the through ball. Rodrigo gets between him and the ball, leaving him on the ground. He runs into the box, plays a pass across goal but Maxi cannot make contact. Similar set up to the chance in the first half but the roles are reversed between Maxi and Rodrigo.
60' - Soler receives the ball in the penalty box, takes a touch and then a shot but the defender's hand blocks it. The Valencia players protest for a penalty but the referee denies. VAR agrees with his decision.
61' - Kondogbia, Gameiro and Cheryshev are warming up on the sidelines.
62' - First yellow card of the game. It's for Eibar after Charles trips Parejo.
65' - Eibar with their first substitution, Atineza comes on for Sergio Alvarez.
66' - Valencia denied a penalty claim from the referee and VAR. Soler had crossed the ball to Maxi Gomez and the defender got his foot to the ball, tripping him up. Maxi Gomez did a few rolls on the ground to sell the decision but the referee wasn't buying it.
69' - Diakhaby and Charles are both left on the ground following an aerial duel. Temporary stoppage in play.
70' - A change for both sides. Eibar take off Inui for De Blasis. Gameiro will be the first substitution used by Valencia. Maxi Gomez is taken off. Valencia need to put this game to away, this scoreline is never safe.
76' - Yellow card is shown to Daniel Wass for impeding a player with arms.
77' - Jaume with another save to deny Eibar. A cross from midfield was met by Charles in the penalty box, he headed it towards goal, just under the cross bar but Jaume tips it over.
79' - Sergi Leon with a shot from distance but it's just over the cross bar.
81'- Final substitution for Eibar. Charles leaves the field to be replaced by Quique
83' - Celades brings on Kondogbia and takes off Rodrigo. This is probably with Wednesday's game in mind but I hope it doesn't mean the strategy will just be to defend for the next 7+ minutes.
84' - Yellow card for Eibar's Paulo Oliveira.
85' - Eibar get in a good position in the Valencia penalty area but the player hesitates instead of shooting. He pulls it back hoping that a teammate await but he only finds Coquelin who starts the counter-attack the other way.
87' - Gameiro and Ferran lead the counter chased by 3 Eibar defenders. Gameiro runs the ball to the goal line and attempts to cut across but the ball goes out of play for a goal kick.
89' - Valencia make their final substitution, Coquelin is replaced by Cheryshev.
90' - Second yellow card for Paulo Oliveira for a heavy challenge on Parejo. He is shown a red card and sent off. Four minutes added for stoppages.

A good win for Valencia on their first game post-break. The players looked rest and full of energy. This reflected in the performance as Valencia were the dominant team, especially in the first half.

This was also another case where the game should've been put to bed earlier rather than defending a narrow lead for 60+ minutes. With both Maxi and Rodrigo off for the final minutes of the game, Celades opted to defend the lead and rest the players rather than go for the second.

This win would leave Valencia 6th with 31 points but most games of the matchday are still yet to be played. An important 3 points nonetheless.

Regardless, this will be a confidence boost for the team to take into the mid-week. A lot of heads were undoubtedly thinking of that game already. The team has to travel a long way to Saudi Arabia where the cup will take place. It's even better that Maxi Gomez would start off with a goal ahead of that game.

Next game will be on Wednesday at King Abdullah Sports City in Saudi Arabia for the Copa del Rey Semi-Finals against Real Madrid. Amunt!
Posted by Amunt.Valencia at 2:07 AM
Email ThisBlogThis!Share to TwitterShare to FacebookShare to Pinterest
Labels: La Liga, match preview, match report, results
Newer Post Older Post Home