The fourth competition for the season begins for Valencia in Wednesday’s fixture against UD Logroñés. With the new format of the competition, there is only one leg, meaning the winning of this match goes through to the Round of 16. Valencia come in as the reigning champions to defend their title.

The result of the new format is that Valencia will probably field a better squad than what they would do otherwise. Instead of providing a rest opportunity for the main squad and some game minutes for the bench players, this is just another load onto the main team to take on. It must also be said that its another opportunity for players to get injured in a season already riddled with injuries. As the team moves into the crucial part of the season, these cannot be afforded.

Logroñés plays in the Segunda División B of La Liga. While this would be a simple game for many other team, recent results indicate that there could be a tricky game. Fixtures against Eibar and Valladolid who are closer to the bottom of the table proved challenging with tight scores. Just 3 days ago, humiliation against RCD Mallorca, a relegation side, with a 4-1 scoreline.

This competition always draws mixed responses, some people, including the owner himself, simply do not value this competition (at least according to Marcelino). They would rather efforts be focused on the main sources of revenue and prestige – La Liga and the Champions League. Extra-time and penalty shoot-outs are also possible in this competition, adding to the exhaustion and could result in a tired squad for an important weekend fixture against Barcelona. Others want Valencia to be competitive in all matches, to have the mentality of a big team and believe they can win it all. Regardless of which camp they’re in, I think most would be upset with a bad result here.

While Valencia suffered a 4-1 defeat away from home in their last game, Logroñés pulled off a comeback away from to Haro scoring two goals into the second half to win the game 1-2.

Garay is available for selection, having missed last game with an ankle injury. Hopefully, his reintroduction provides some structure back to a defense that was largely absent the previous game.
Rodrigo remains in recovery with the goal to play in the weekend match against Barcelona.

Paulista and Kondogbia are missing from the squad list due to suspension from accumulated bookings in the last season's Copa del Rey. This leaves room for both Mangala and Esquerdo in the squad as their replacements. 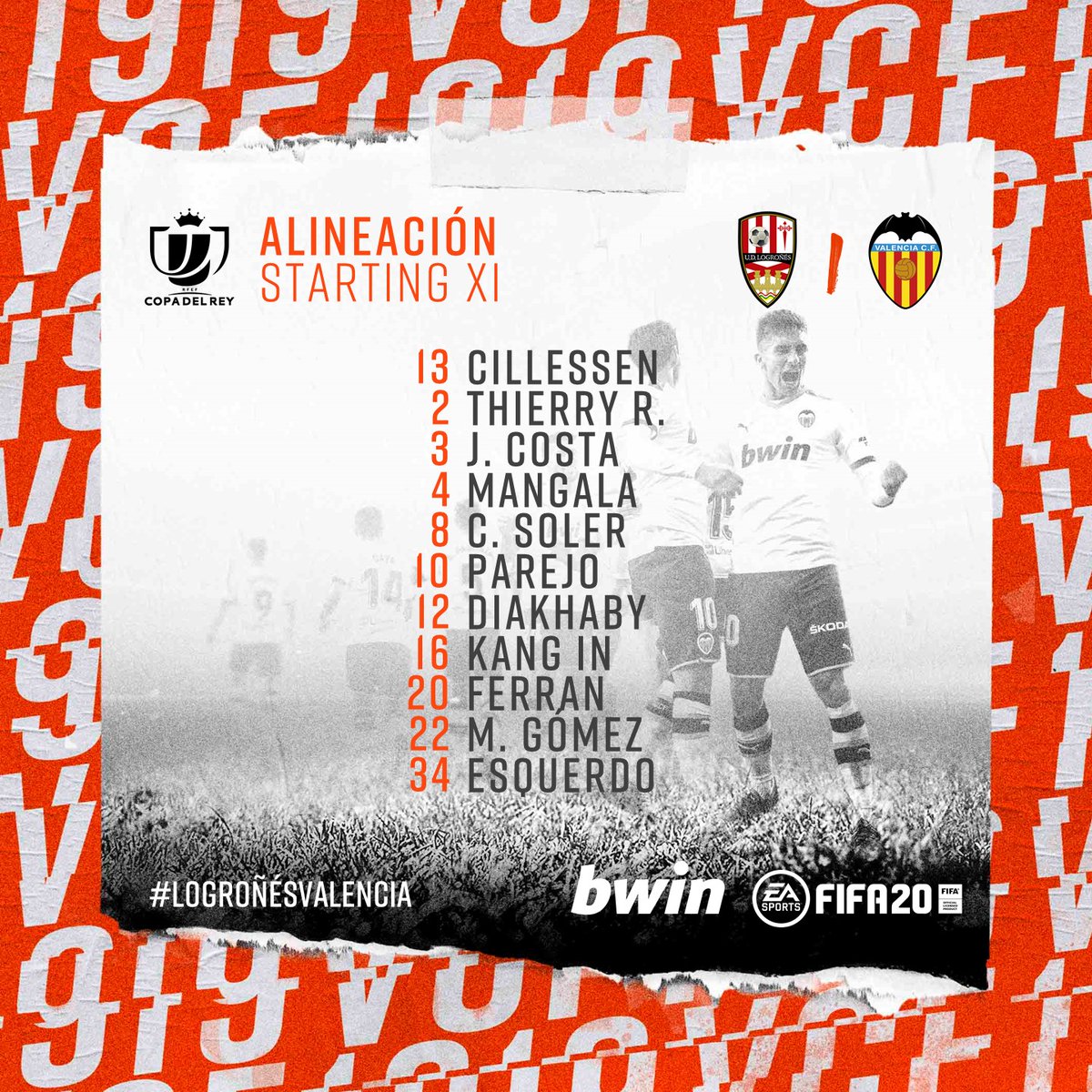 It's a very different lineup from what was expected. It seems Celades has the game against Barcelona in mind and trust this team to do the job against Logroñés.

Cillissen returns to the lineup after an extended spell on the bench. It seems he will be in charge of this competition.

The defense has been overhauled completely with all substitute players being used, even Mangala and Correia.

With Parejo suspended in the upcoming La Liga fixture against Barcelona, it would make sense that he starts here. Esquerdo joins him in midfield. Soler and Ferran play their usual roles in wide positions.

KangIn and Maxi look like they will lead the attack. There is a chance that Ferran plays up front and KangIn takes his wide position.

1' - It seems like there was an error in the posted lineup with Domenech starting over Cillissen. I wonder why Cillissen is not being given any game time. Ferran is playing wide, KangIn playing up front with Maxi Gomez. Soler and Parejo are playing centrally, leaving Esquerdo on the left flank.
14' - GOAL Valencia! 0 - 1! Correia with a run forward, passes to Maxi Gomez who spreads it wide to Ferran and continues his run forward into the box. Ferran picks him out perfectly for an easy header past the keeper. Good start!
21' - KangIn Lee with a shot on goal that's cleared off the line! Close to a second! Jaume Costa provided the delivery, Kang In controlled the ball with his back to goal and did a turning shot on goal.
25' - Another shot cleared off the line, this time from Ferran! The corner was not dealt with well by Logroñés and it fell to Ferran in such a good position. He would normally score that.
29' - Good from Diakhaby and Mangala maintaining their discipline and playing the Logroñés player offside, he was through on goal there.
31' - Yellow card for Ferran Torres. It was KangIn who fouled the Logroñés player yet Ferran got booked. It's probably for something prior to that. Yeah, the replay showed an earlier challenge of Ferran's where he had his studs up.
36' -Logroñés pulling off a string of passes around the Valencia penalty area. The resulting shot is blocked by Mangala.
41' - Logroñés with a free kick from a dangerous position to the right of Jaume's goal. It was Correia's foul that resulted in the free kick. It's crossed into the box and Mangala's header hit the crossbar and bounced back out. The resulting cross is claimed by Jaume. Almost an own goal there from Mangala.
44' - Logroñés gets some space and makes a runs horizontally, drawing defenders. He surprised with a shot from distance but it's slightly high and wide.

HALF-TIME: It's a half of very small margins. Three chances, 2 for Valencia and one for Logroñés that were close-calls. The two chances for Valencia fell to KangIn and Ferran, who would normally gobble up those chances, but both efforts were cleared off the line. The close-call for Logroñés was in the form of a header by Mangala as a clearance attempt but it hit the crossbar and bounced out. In general, Valencia has the edge in this game so far with more possession and more shots on goal.

The defense looks more alert than last game. Correia's side has been the main point of attack for Logroñés and has put him under pressure. Costa hasn't had trouble from his end, while Diakhaby and Mangala are dominating any aerial plays. In midfield, Parejo and Soler have given the ball away a couple of times which is not good in any game but especially today where they should be dominating. KangIn is getting in the right positions but is also guilty of some giveaways. Esquerdo has been hardly visible. Maxi continues to build his goal count for the season. Second half will start soon, hopefully the team put the game away and complete a convincing second half.

46' - Mangala with shaky start to the half, giving the ball away and then getting completely taken out by the attacking player. He manages to get it out for a corner. The corner is header just over the bar, too close for comfort.
48' - Diakhaby with a give away, a loose pass across the box right to the Logroñés player. He takes a shot on goal but Costa is swift to get in the way and block the shot.
52 ' - Logroñés have come out strongly this second half taking control of possession and chances. Correia being targeted yet again.
54' - Valencia with a chance from the corner. Parejo picks out Maxi Gomez at the near post, who takes a glancing header across goal but it's over the crossbar,
55' - Yellow card for Valencia. Mangala with a push from behind on the Logroñés player.
60' - More possession giveaway from Valencia causing a counterattack. David drives the ball forward and tries to test Jaume with a shot from distance but it doesn't trouble him.
62' - First substitution for Valencia. KangIn off, Coquelin in.
66' - Logroñés with a change for their own, Quintana off for Andy.
70 ' - Logroñés has looked like the more dangerous side this half. So many giveaways from the midfield that the opposition uses to counterattack.
72' - Coquelin with a good interception at the edge of the Valencia box. He drives the ball forward, spins past the opposition player and picks out Ferran. Ferran looks up, sees the run of Soler into the box and picks him out with a through ball. However, the keeper anticipates the effort and smothers the shot.
73' - Ferran seems to have switched sides and is playing on the left side of midfield now.
74' - Good chance for Valencia. Ferran finds Costa's run with a through ball but the resulting cross is directly at the keeper. He parries the ball straight to the feet of Maxi Gomez but the shot is over the crossbar. That should've been a goal.
75' - Second substitution for Logroñés, Mateos off, Saenz in.
76' - What a chance. Quick free kick from Valencia in midfield finds Parejo who plays in Ferran Torres with a through ball. He's one-on-one against the keeper but cannot score as the keeper saves the effort.
77' - Second change for Valencia, Maxi Gomez is replaced by Kevin Gameiro.
79' - Logroñés with their final chance, Ander Vitoria in for Garcia. Commentator saying that he's their top scorer this season, wonder why he didn't start. Clear sign of intent in going for the win for the opposition.
81' - Yellow card for Oleatxea. Dangerous challenge from behind on Parejo.
83' - Gameiro uses his pace to drive into the box onto a backheel from Correia. The keeper parries it into his post but it stays out. Almost an own goal.
85' - Final change for Valencia is an attacking one. Esquerdo is taken off for Sobrino.
89' - So many chances are being wasted with poor delivery on the final ball. Sobrino and Ferran both had good runs but they were not picked out well.
90' - Three minutes of time for stoppages added by the referee.
90+2' - Valencia content with just keeping possession and running down the clock.

Valencia are through to the Round of 16 but only narrowly. If it's only about the result the job was done. Other than that it was hardly convincing.

Valencia had the better first half with the goal from Maxi Gomez and two more potential goals with efforts from KangIn and Ferran that were cleared off the line.

In the second half though, Logroñés took the reins of this match and cause problems for Valencia. In the first few minutes of the second half alone, they could've scored twice by way of complete complacency from Mangala first then Diakhaby. That was their biggest mishap in match where they played decently well. The most frequent threats in the half though were by applying pressure to Correia's end.

The midfield continuously gave the ball away over and over, facilitating these attacking plays from Logroñés. Only when Coquelin was introduced did the structure of midfield return. Having Soler and Parejo together in midfield resulted in a lot of overlap of responsibilities and not enough variety of skill sets.

The offense in the second half lacked the sharpness to score. The chances were there. Soler's chance was dealt well with by the keeper. Gameiro's also was parried but almost resulted in an own goal for Logroñés. Ferran had a one-on-one chance squandered. Maxi Gomez, Sobrino and Ferran all had a run into a good position but the final delivery wasn't there for them to score.

This game was a good test of the reliability of the bench. For me, Costa passed most convincingly of them. Gameiro seems to do well when brought on late where his pace can cause the most trouble. Kang In had a good chance, but also got out-muscled off the ball. Esquerdo was largely invisible that game. Mangala and Diakhaby had one or two mishaps that would've been costly against a higher caliber team. Correia was under a lot of pressure with his side being the chosen path of attack for Logroñés and more often than not handled himself. Although it cannot be helped to think that against stronger opposition, it would be a different story.

Next game is on Saturday when Valencia return to the Mestalla to face Barcelona in matchday 21 of La Liga.
Posted by Amunt.Valencia at 5:26 AM
Email ThisBlogThis!Share to TwitterShare to FacebookShare to Pinterest
Labels: Copa del Rey, match preview, match report, results
Newer Post Older Post Home