Five game on the season. Last game in La Liga was a big loss but no unexpected. Our next game away to Chelsea was also tough but the team held on and went beyond expected to snatch a win. With 2 big games under his belt, Celades faces a game against Leganes and former Valencia coach Pelligrino. He has to carry the momentum of the win and the trust he's beginning to establish in the team to get another win. Especially at home. While Leganes find themselves at the bottom of the table, we're in no position to take any games for granted as a win.

There were reports that Celades was beginning to experiment with formation. It seems he was practicing a 4-4-2 that transitions to a 4-4-3 in attack. It will be interesting to see how this will be implemented. 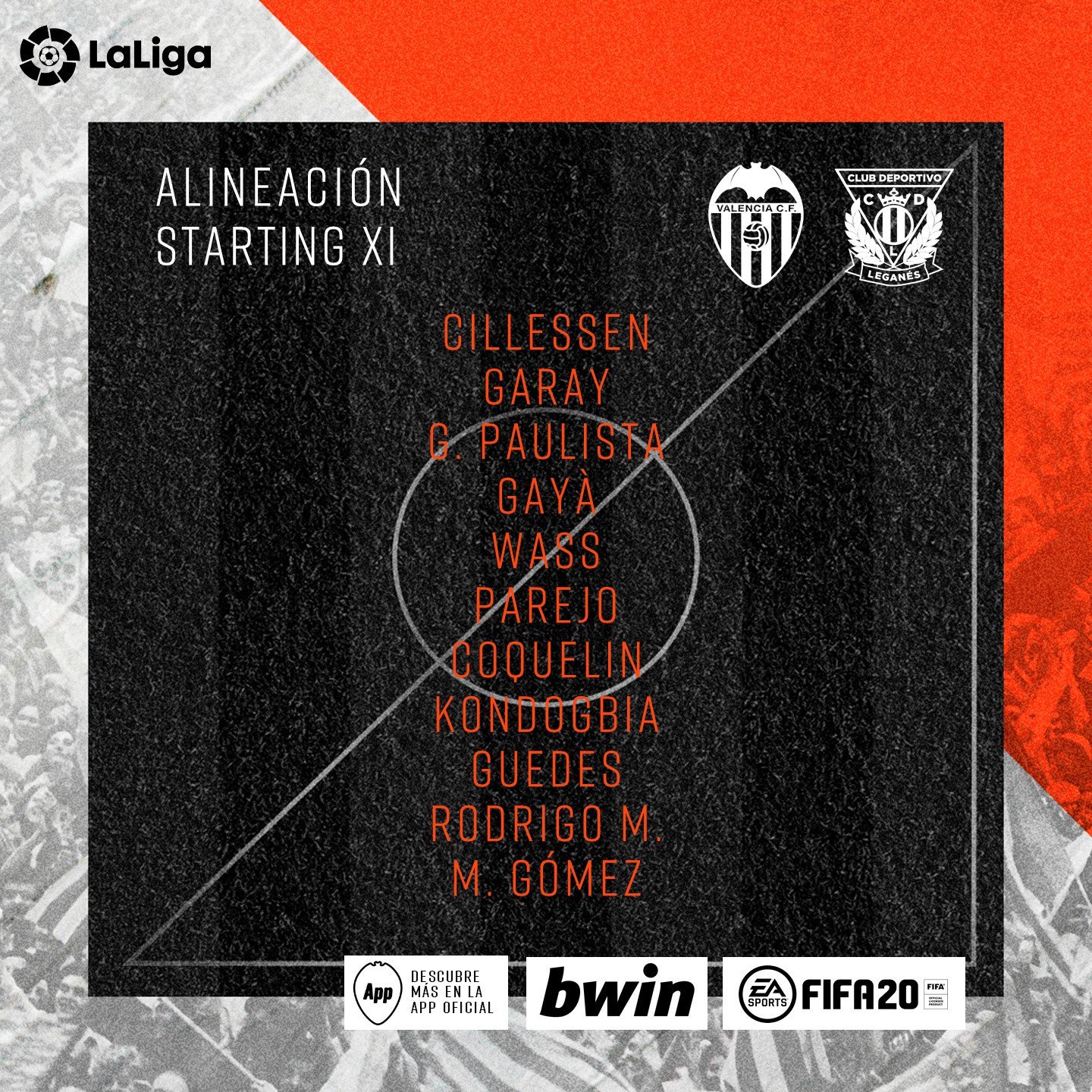 Lineup is largely the same from the Chelsea game. The defense 4 maintain their hold on the positions, Coquelin and Kondogbia start together again with Parejo in midfield and Rodrigo gets another start after his goal last game. The two changes are Guedes returning to the lineup instead of Cheryshev and Maxi Gomez earning his first start over Gameiro.

6' - Leganes with a dangerous corner. Their striker breaks free of the defense and left unmarked. He connects but fires straight at Cillissen who smothers the effort easily.
14' - Wass with a cross towards Maxi Gomez but caught by the Leganes goalkeeper.
15' - Leganes return the favor with a similar effort, caught by Cillissen.
17' - PENALTY! Rodrigo takes on 3 defenders, dribbles past them into the box where he is taken down. Great run! Referee checking with VAR.
20' - The penalty is given, Parejo steps up to take it. Fans chanting Parejo!
21' - And he scores! GOAL! 1-0 Valencia! Parejo calmly sends hits the ball into the top of the net. Yellow card also given to the Leganes player for the foul.
23' - Leganes find some space at the edge of the area and Gaya tackles. He gets the ball with one leg but clips the player with the other leg. Yellow card Gaya. Free kick in a dangerous position for Leganes.
24' - Close one! He curls the ball around the wall but hits the post and back into play.
32' - Cooling break
35' - Goal for Leganes, it's 1-1. A lob into the box is not cleared by the defense. The ball falls to Garay who is dispossessed in the box and the ball finds its way to a Leganes player who slots it past Cillissen at the near post. Referee reviews the initial challenge on Garay but the goal stands. Cheap goal to throw away the lead.
40' - Rodrigo is taken out on the flank with a heavy shoulder check from a Leganes player. Yellow card given by the referee.
41' - Parejo with another training ground routine. He squares the ball to Coquelin at the edge of the box in space. He fires but the ball is blocked by the defense and deflects for another corner.
42' - The corner is fired towards the near post, headed away by the Leganes player and the ball is played to Garay on the opposite side. He fires but misses the goal.
45' - Five minutes are added for all the stoppages and VAR checks.
45+2' - Two attacks in a row for Valencia that had good build up but the crucial pass is over-hit away from the Valencia player both times.
45+3' - Effort from Rodrigo after good build up between Wass and Parejo. He cuts inside and curls a ball towards the far post but saved by the keeper.
45+4' - Coquelin fires from distance but sent into the stands.

Half time and can't say that we dominated the half. The possession slightly favors us but Leganes had more dangerous chances. The team is largely playing a 4-4-3 in attacking play with Rodrigo and Guedes on either side of Maxi Gomez. Rodrigo and Parejo are largely dictating the play. Guedes hasn't seemed that prominent in his return. Hopefully, the half-time talk addresses some of the issues, especially the defensive errors that lead to the goal.

47' - Guedes plays a one-two with Gaya out wide. He makes a run inside beating one defender, then another. He gets into the box fires at the near post but wide. That's the Guedes we want to see. More of this please. The finish will come eventually.
51' - Free kick won by Parejo and taken by him. He fires into the wall and wins a corner from the deflection. Corner causes no trouble and is cleared quickly.
54' - Kondogbia with a wonderful diagonal ball to pick out Gaya in space out wide. He squares it to Maxi Gomez but the defender does just enough to deny him the space for a shot on goal.
55' - Gaya takes a knock. He prepares to leave almost immediately and the medical staff spend no time in taking him off, as if he had prior concerns. Costa is brought on as the first substitution.
58' - Kondogbia is booked after using his arm to shrug away a challenge from a Leganes player.
59' - Second substitution for Valencia. Maxi Gomez off, KangIn on. Maxi hasn't had that many efforts and wasn't that involved. Rodrigo takes his spot up front.
65' - Parejo plays the ball to Costa in space, he crosses the ball but it's blocked for a corner. Corner hit too close to the goalkeeper.
66' - Valencia have dominated possession in the second half but nothing to show for it. This needs to translate to more clear chances and goals..
69' - The set pieces are getting frustrating now. They are either over-hit out of play or towards the keeper. These are wasted efforts. We need more technique on the delivery.
76' - Cooling break. The ball delivery hasn't improved and many efforts are wasted or give possession back easily.
80' - Kondogbia with a challenge on the edge of the area. Free kick for Leganes in a dangerous position. Hit right at the wall and deflected away.
82' - Guedes taken out at the edge of the area and free kick is given for Valencia.
83' - Ferran Torres comes on for Coquelin. Celades showing the attacking intent with this substitution. He wants the win.
84' - Parejo hits the target, the keeper parries, the ball falls to Garay who fires into a defender. Claims of handball but VAR gives nothing.
85' - Corner is taken, Ferran raises his foot too high to get the ball and fouls. Instant yellow card.
86' - Parejo plays a delightful through ball for Ferran Torres on the right. He goes past his defender and through on goal, he decides to play the ball to Rodrigo instead of shooting. Rodrigo misses the ball. Perhaps he should've gone for the shot instead.
87' - Guedes taken out yet again. Yellow card for Leganes. Free kick from distance.
88' - The ball is delivered well to Rodrigo, who nods the ball over the goal.
89' - Ferran Torres goes on a great run past his defender but taken out by Leganes defenders. Leganes trying to cling on and delay every action to slow play down and run the clock down.
90' - Six minutes added by the referee.
90+1' - Paulista with a foul on the Leganes forward in another threatening position. Free kick Leganes.
90+3' - Many stoppages due to rough challenges. Time is running out.
90'+4 '- Kang In with a good cross but punched away by the keeper
90+5' - Another over hit cross this time from Costa, out of play for a goal kick.
90+6' - Leganes with a quick counter after Guedes was dispossessed. It was 3 on 3 but the ball is parried by Cillissen for a corner.

Second draw of the season. We stand with 1 win, 2 draws and 2 losses now, giving us 5 points from 5 games. Some interesting build-up and a few sparks of creativity but overall it should've been better. First half was a lot more equal between teams. Second half we had complete dominance for the first 30-40 minutes. However, all the possession failed to materialize and impact the scoreline. Many wasted set-pieces and crosses due to poor delivery. It was quite frustrating and perhaps better delivery would have produced something else. As we went for the win in the closing minutes, Leganes had a few counter attacks and took advantage of the errors.

Rodrigo has confirmed in the post-game interview that the formation is a 4-4-2 defensively and a 4-3-3 offensively, as was reported in the news. There were 4 days to work on this between the Chelsea game and today, so probably it's far from perfect and from Celades's vision. He's still only 3 games in but many would still expect a win, especially at home and against the team at the bottom of the table.

Next game is mid-week on Wednesday against Getafe at Mestalla. This game is always rough with plenty of aggression, especially in recent times. There has been a lot of disputes on and off the field between players and even the coaches involved. Hopefully, the team continues growing and we see more evolution against Getafe. It was great to see the crowd fully behind the team today. It will definitely help to have the same against Getafe.
Posted by Amunt.Valencia at 4:14 PM
Email ThisBlogThis!Share to TwitterShare to FacebookShare to Pinterest
Labels: La Liga, match preview, match report, results
Newer Post Older Post Home