Various sites are now reporting what has been clear for a week. Jasper Cillessen has signed for Valencia after passing a medical, with Neto going the other way to Barcelona, where he will earn up to three times more.

For Cillessen, the move makes perfect sense. He will earn the same as he did at Barcelona and get a lot more game time than he would as second choice to Ter Stegen, one of the best keepers in the world.

The mystery remains, though, what went through Neto's head to prompt this change? Sure, he will get more money, but the whole point of him joining us in the first place was because he was fed up getting little game time at Juventus. Going to Barcelona seems a bit like Alcacer going there, a backward step in his career.

Neto was the first signing of the Marcelino era and, predictably, it led to a lot of grumbling from our fans, just see the post and the subsequent comments here. His early period didn't dispel that, as he seemed too static with some goals he conceded. but he improved greatly over time to the point of being a key player. If I ever get around to writing player ratings for the season just gone, Neto would certainly have been one of my top three, along with Parejo and Gaya. Some of our fans seem to have an obsession with bringing back past players and coaches, but the name of Diego Alves was quickly forgotten.

The stories doing the rounds are that it all blew up over the Copa del Rey. Marcelino confirmed that Jaume would play the final, as he had every game in the tournament. Having made that call, Marcelino then decided that Jaume should get the last two league games of the season to sharpen him up and get him ready for the cup final. It could all have backfired, with Jaume producing a ropey performance, like the questionable one away at Betis, but it didn't. Good decision from the coach.

It all seems to have gone down badly with Neto, though. There are various stories. One that he was annoyed because that meant that he was not in goal to celebrate either the league 4th place or cup successes. Another that he felt that this cost him a place in the Brazil squad for the Copa America. The last is that he had a fall-out with Marcelino. The last seems plausible. Neto's last game for us saw him concede four goals at home to Arsenal, a bit of a sad way to go out. It's entirely possible that Marcelino, annoyed by that coming after Neto had conceded nine goals in the 4 previous games, decided to bench Neto anyway.

So while it's sad it's ended this way, good luck to Neto. He'll get three times as much money for doing a quarter of the work. Who wouldn't say yes to that?

Unlike in previous cases, the replacement seems perfectly fine. 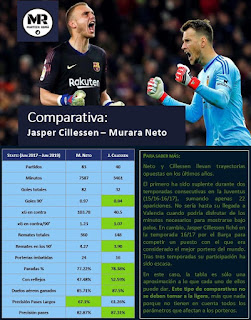 Cillessen is the same age and actually does better on most metrics than Neto. Does better in the air and better at playing the ball out from his feet. Some of our fans are grumbling as usual and I don't see why. I'd have preferred to keep Neto for continuity reasons but if he wants to go, the club has found a very good replacement.

Another big advantage of the deal is that Valencia gets the cash to clear their accounts by 30 June. If we hadn't done this, we'd have been forced into a big sale, probably of Rodrigo and for a lesser price than the club hoped for. As it is, we can play hardball on Rodrigo until the end of the transfer window.

What do you think of this deal?