Nemanja Maksimovic to stay in Getafe 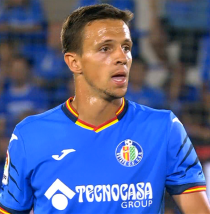 Valencia CF and Getafe CF have reached an agreement to end the 'purchase clause' in Nemanja Maksimovic's sale contract. As most of you know Valencia CF built in a sort of buy-back option for Nemanja Maksimovic when they sold him to Getafe CF for the 3 years after his sale, with each year the transfer fee increasing. Thus Valencia CF this year has the option to purchase Maksimovic from Getafe for around 9 million euros.

Valencia CF would get an additional 5.5 million euros, on top of the 5.5 million euros Getafe CF already paid for a total of 11 million euros. Valencia CF gets to have a 'future sales fee' in the new contract though and are said to receive up to 30% of the transfer fees if Getafe CF choose to sell the player in the future.
Posted by SlickR at 3:09 PM
Email ThisBlogThis!Share to TwitterShare to FacebookShare to Pinterest
Labels: news, official transfers
Newer Post Older Post Home