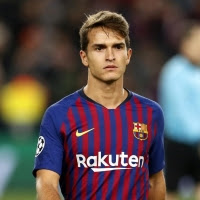 Valencia CF is looking to build upon the success of this season and strengthen the squad for next season, and Valencia CF administration believes Denis Suarez from Barcelona CF is the ideal man to do so. The player has had limited time on the pitch for Barcelona CF and is aware that his playing minutes are going to be even more limited next season and is looking for a way out himself.

Reports suggest that Denis Suarez would love to join Valencia CF and that he is willing to take a certain pay cut to facilitate the move. Barcelona CF have a rather large squad these days and is likely to offload some of the redundant and periphery players in order to make room for few more specific signings.

Denis Suarez spent the season on loan at Arsenal FC, but his playing time there was limited and he was unable to impose himself on Valencia's former coach Unai Emery. Right now he is valued at about 10-14 million euros, though again it will all depend if there is demand for him or not. Reports suggest that Atletico Madrid are interested in Denis Suarez as well in order to provide more cover for their midfield, so if Valencia CF has competition trying to sign the player, he might be priced out of our market range.

Personally I don't rate him highly at all, he had one good season at Villarreal CF and that was it, though admittedly its hard to get any playing time at Barcelona and show off your stuff, but at 25 years of age and limited experience playing, I just don't think he is worth much at all. If we can maybe get him for 5-6 million euros and have him as cover for Dani Parejo in the mid then its okay, but paying 12 million euros or more for him would be foolish in my humble opinion.
Posted by SlickR at 3:36 PM
Email ThisBlogThis!Share to TwitterShare to FacebookShare to Pinterest
Labels: news, transfer speculations
Newer Post Older Post Home