CHAMPIONS LEAGUE, WOHOO! This ended up being a fantastic season, yes there were difficulties in the first half of the season, it was a slow start, but the team built up slowly and we managed to reach the semi final in the Europa league, we managed to qualify for the Champions league and next week we play in the final of the copa del rey.

Congratulations to Valencia CF and to all of its fans for a fantastic and successful season!

This is it then. The last and most important game in the league of Valencia's topsy turvy season could see the team fulfil their decent comeback this year by sealing Champions league football. Results last weekend, apart from Sevilla drawing instead of losing, couldn't have been better as they saw our rivals for today, Valladolid secure their place in La Liga for next season.

Valladolid and their coach in particular have animosity towards Bordalas going back to a play-off final. That could also help us. So, with everything in our favour, it's up to us to seal the deal, without complacency. We know from games like the one versus Rayo that our team is totally capable of screwing up when it's needed most.

Big news in the squad 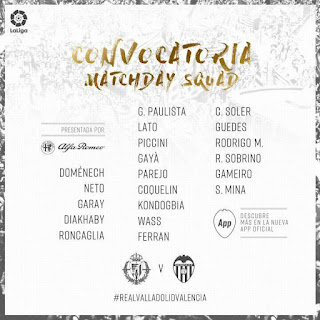 is that Kondogbia returns, though I wouldn't expect anything more from him other than a late sub appearance at best. Garay also has injury doubts and probably won't feature. Soler is suspended and Marcelino has said that Jaume will get the remaining games.

Given all that, I would expect to see: Jaume ; Gaya, Diakhaby, Paulista, Piccini ; Guedes, Parejo, Coquelin, Wass ; Rodrigo, Gameiro. (Mina instead of Gameiro is possible.) 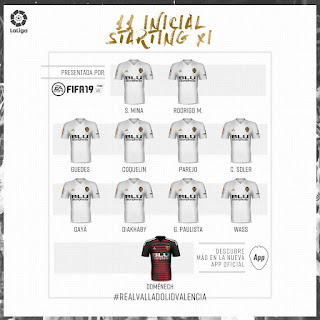 A nervous first half, or is that just me? Valencia struggled to threaten and at times Valladolid looked like the team with more to play for. It got worse in the 14th minute when news came through that Getafe had scored and were therefore in fourth temporarily. Valladolid had a couple of good chances, one from a free kick where Jaume fumbled it with his feet and another when Wass got owned and Jaume had to save at his near post. Valencia fluffed some chances too. Wass put a great ball across the box but neither Mina nor Rodrigo were well-positioned. Mina slipped when receiving a great pass, when he would have had an easy pass to Rodrigo and was also denied by a good save from Joel. But the breakthrough came in the 35th minute. Rodrigo robbed, found Mina and good footwork from him found Soler who calmly slotted home. Getafe had scored a second in the 24th minute but VAR had ruled it out. Just before halftime Villarreal equalised against Getafe, so we have that insurance now, but the best insurance will be Valencia asserting themselves more and adding more goals. We cannot rely on other teams to slip up.

---------------------
SECOND HALF
---------------------
Valencia got the insurance goal in the 52nd minute. The TV basically missed it as they were focused on a replay as Joel took a goal kick, only cutting back to the live feed just in time to see Rodrigo score. What happened was that Joel's goal kick found the defender, but his touch was too heavy, Parejo stole in, robbed the ball, and one-on-one unselfishly rolled the ball to Rodrigo who had a tap-in. After that, Valladolid put in noticeably less effort. There were a couple of nervous moments: Jaume produced a couple of great saves to maintain his clean sheet and there was a VAR check with 12 minutes left for a possible penalty in Valladolid's favour. The commentator announced that the ref had given it but luckily he was wrong. Getafe conceded an equaliser and Valencia, after lagging behind by 12 points at one stage, take fourth with a 2-point gap.

Good game for Jaume, while Diakhaby was a titan in the air, heading out goodness knows how many crosses. Kondogbia came on and played the last half hour and looked very good.

Plenty of things we can nitpick over about the season as a whole, the poor start almost cost us, but ultimately it's been a good centenary year: Europa semis, back-to-back Champs league qualifications for the first time since 2012. That we did it by overhauling Sevilla and Getafe, 2 hated rivals, just makes it all the sweeter and still a chance of silverware next week in the Copa. AMUNT!!!