==PREVIEW==
It's the last game of what has been a weird season. Appropriately, it's a final, Valencia's first in 11 years. Back at the start of the year, when Valencia lost its last 16 tie to Sporting Gijon in the middle of a miserable run, this looked unlikely. Not only that, but getting anything from the season looked unlikely at that point in time. The team lay 12th in the league, nine points behind 4th placed Alaves, with rumours of Marcelino's sacking growing. European qualification seemed to depend on winning the cup to get into the Europa league. The panorama now is hugely different. Valencia staged an epic recovery to meet the season's main target of 4th place and go into the game in a relaxed manner. As underdogs, most neutrals expect us to lose, whereas there is huge pressure on Barcelona, following another humiliating reversal in the UEFACL to Liverpool. We have an excellent chance here to end our centenary season in style.

In our favour is Barcelona's poor morale. Numerous Barcelona fans actually want us to win, believing this will be the best way to get rid of Valverde (talk about spoilt and ungrateful.) Barcelona failed to beat us in both league games this season, needing Messi to dig them out of their holes and get a draw. Also, Barcelona have several players out. Ter Stegen probably wouldn't have played anyway but they also miss Luis Suarez, Arthur, Rafinha and most likely Coutinho and Dembele. Marcelino has never won against them in 20 games so now is the time.

For Valencia, apart from Cheryshev's continued injury and Kang-In's absence for the international tournament, it's almost a full squad. There are slight doubts about Garay and Kondogbia but the latter at least is likely to feature, at least as sub

I think Marcelino will start Wass instead of Soler and aim to hold Barcelona at bay in the first period, with Soler, Mina and Kondogbia the possible second half subs. LET'S DO THIS!

==HALF TIME REPORT==
I logged on to do a quick half time report, but our regular contributor Amunt.Valencia has written one in the comments, so I'm stealing it and please give full credit to him for this part....

5' - That was a golden chance for Rodrigo! We almost scored. Both sides seem nervous.
22' - GOAALLLLLLLLLLLLLLLLL GAMEIRO! Nice touch to take Alba out 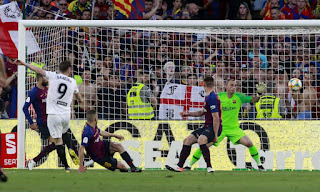 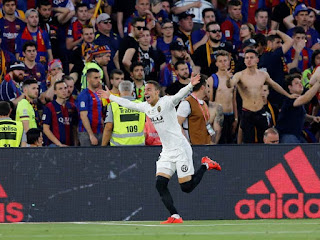 36' - Parejo controlling the ball and Messi so well
42' - Our tackling and interceptions today are on point. We're getting helped by sloppy Barca play though.
45' - Great leaping save from Jaume to deny Messi from distance!
Half-time: 2-0: Really the best half we could've hoped for. It's ours to lose from here on out.

==SECOND HALF==
Valencia did it! The team had to soak up a lot of pressure in the second half. Jaume made a couple of great saves. The team conceded (as usual) from a corner, Soler, who had done well otherwise, playing Messi on to follow up a rebound and score to set up a nervous last 15 minutes.

Guedes didn't do himself any favours by scuffing a couple of great chances on the break to kill the game but at this point, it seems like the nitpicking about that, and some of the performances this season, can wait for another time. 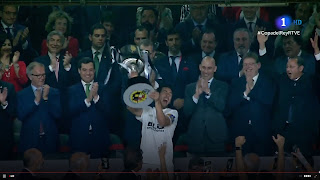 4th place, Europa semis, a Copa win. Don't know about you folks, but that makes a fantastic season for me. AMUNT!!!! 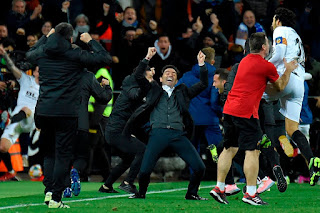