Final home game of the season, must win as always, Valencia's 59th game of a hectic season, when did we last play so many? Few surprises in the line-up 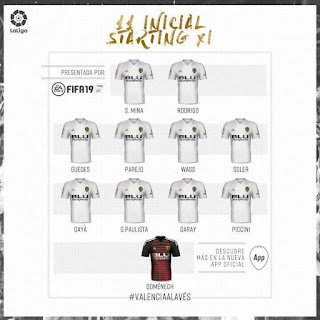 Jaume is probably a mild surprise. Neto and the defence, after being good all season have been a bit shaky recently, but I suspect this is just to give Jaume a game to get him ready for the Copa final. Up front, Mina starts instead of Gameiro.

Alaves, who were fourth at the end of March, have hit an awful run of form with 3 draws and 5 defeats in the last 8, but as we saw with our game against Rayo, that doesn't allow us to be complacent.

Of importance to us is the game at the Nou Camp where Barcelona have gone with Cillessen; Roberto, Piqué, Umtiti, Alba; Rakitic, Busquets, Vidal; Malcom, Messi, Coutinho. Apart from resting Ter Stegen, looks like the strongest line-up possible.

A couple of news items. It looks like Valencia will receive a transfer ban for signing underage players. The club can appeal, delaying any sanctions and then work around them.

Secondly, the club will resign Maksimovich this week, exercising the 7.5 million buy back clause. As he appears not to be part of Marcelino's plans and we are well stocked in midfield, the club's plans are to cash in on his good season, with rumoured interest from Germany may be bringing in 15 million.

==FIRST HALF==
With pressure to succeed could Valencia blow it? Yes. Though the team had looked lively in the opening period, with a Rodrigo-Guedes interplay leading to the latter cutting inside and sending a shot just wide of the post. Valencia's love of shooting themselves in the foot was in evidence again. A fluffed corner led to Alaves having a 4 on 2 counter attack which was eventually blocked by Jaume, I can't say saved, since it hit him in the face. Corners worry me as much as counters so I wasn't hugely surprised when they scored, beating Jaume at his near post. Soler lost his man and Mina wasn't able to get up to block.

Both made amends. First, a long ball from Paulista saw their defender screw up, trying to head back to the keeper but instead letting Soler equalise. Then, from a corner, Mina headed in to put us ahead. Rodrigo has had a couple of chances to add to the lead but poor decision making both times saw him either tackled or shooting over. Alaves have had a few counter attacks so they are very much in this. Concentration and a third goal is needed. Other results going our way: Getafe and Sevilla losing and Valladolid, who we play next week winning and hopefully will be safe.

==SECOND HALF==
A very nervy start, with Valencia weathering heavy Alaves pressure but the team produced a more solid performance in this half and in the 67th minute, Gaya put in an excellent cross and Gameiro smartly headed into the turf, with the bounce proving too much for the keeper. Gaya was involved in Valencia's best chance later, making a strong run and finding Gameiro who had the chance of shooting or passing to the overlapping Soler. He chose the second option, which probably was the best, but Soler shot wide with the whole goal to aim at. The game closed out 3-1 and with Getafe losing and Sevilla drawing, that means that Valencia creep into fourth for the first time this season. Valladolid also won and put themselves safe, meaning they have nothing to play for next week (though Getafe's opponents Villarreal did the same.) Finally, after a weird season, we have our destiny in our hands for the first time since matchday 1.