The Valencia city derby always has bragging rights at stake, but tonight is even more crucial for both teams. Levante are just above the relegation zone. A win for Sevilla this weekend gives them a 6-point advantage over Valencia in the race for 4th and means Valencia must win to stay in touch. Lose or draw and the Europa league would be our only route into the Champions league and the win for Bilbao earlier today means there are teams breathing down our neck for the Europa league spots.

Some absences in the team. Kondogbia is out for the rest of the season, Ferran and Roncaglia are suspended and Rodrigo picked up a late injury. 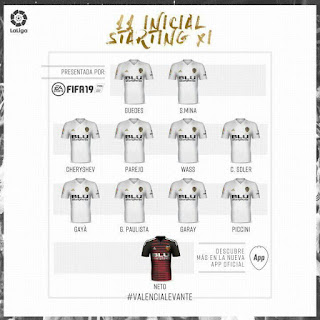 I thought we would see Coquelin in midfield, but Wass stays there: he had one of his better games on Thursday, but I suspect Coquelin still isn't 100% fit. There's a slight surprise up front. Mina starting instead of Rodrigo was as expected, but Guedes, instead of Gameiro, is his strike partner. We've seen Guedes used as forward a few times, but always being switched there late in games after starting on the wing, so this is the first game he's started for us as forward. The only time we previously saw this combo used was against Sevilla in October 2017 after Valencia were already 2-0 up and both Mina and Guedes scored, so the omens at least are good.

HALF-TIME REPORT
Valencia dominated the first half and it took just 90 seconds for us to be ahead, a short corner, Guedes put in a good centre for Mina to head home. He needed that goal, his first in 3 months. Guedes made a powerful run minutes later and fired just over and there were chances in the half for Chersyhev, who headed just over and Mina, whose header was saved. Levante had only one chance in the 13th minute, with Neto saving well and generally our defence has kept them quiet. However, it's still only 1-0, the team is lacking precision in the passes and decisiveness in the final third. Despite Levante not doing a lot, our vulnerability from set pieces means we have to get a second goal to give us a cushion.

Levante played fairly dirty at times and it's amazing that the only player booked is Soler. Piccini went off after a collision, hopefully it is not serious. It looked fairly innocuous, but Marcelino said in the post-match interview that he'd gone to hospital, which sounds more serious.

SECOND HALF REPORT
Well, I said it at half-time: Valencia needed to score to cover our vulnerability from corners otherwise be punished and sure enough, that's what happened. Soler made a mess of clearing a corner and put it in his own net to give them an undeserved equaliser. Us scoring for them looked the only way they would manage it, as their sole effort in the second half was a shot from distance. Levante didn't even had time to pull the champagne cork out, as we quickly restored our lead. A one-two between Guedes and Soler, a clever back heel from Soler allowing Guedes to rifle a powerful shot across the keeper. A few minutes later we did indeed have the 2-goal cushion. From a cross, Soler hit a shot past the keeper, it rebounded off the post behind him allowing Mina to tap in. Soler really redeemed himself from the own goal with a couple of assists, Mina only ever seems to score in doubles and Guedes is in a purple patch and having his best spell since the first half of his first season with us. Would be man of the match for me tonight. A really good Valencia performance: probably should have won by more.