So a crunch week arrives with two tough away games, Atletico Madrid away on Wednesday and tonight, at Betis. Valencia hasn't won against either of the two big Madrid teams away since February 2011 when a brace from Jaoquin took the points. He's starting for the other team tonight and Valencia's recent lack of success in Madrid means it's important he doesn't go away happy. Getafe beat Sevilla earlier. As Getafe have a tougher final set of fixtures this was probably the best result possible and also, from a longer term point of view, if Valencia screw up and don't get 4th, Sevilla are a more dangerous rival than the annoying team of Bordalas. Neither can happen though and it's essential that we get the 3 points and then hope to get something from Atletico Madrid. Drop points tonight and it's hard to see us catching up. 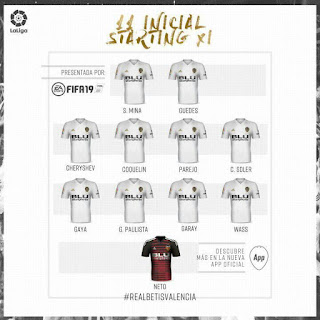 Line up is mostly as expected, with the possible exception of Mina up front instead of Gameiro. I guess Rodrigo is still not 100% fit. Mina-Guedes worked well enough last time and both scored in the corresponding fixture last season so here's hoping for a repeat.

==FIRST HALF REPORT==
A mostly frustrating first half. Valencia stood off and allowed Betis lots of possession: it was 74% in their favour at one moment. But a common complaint against Setien this season is that his team have lots of possession without doing anything with it and so it proved. There was a half shot that shaved the outside of the post and a few headers off target but nothing major. Bad news for Valencia as Cheryshev went down injured looking like he twisted something. However, he was able to walk off, so hopefully it isn't too bad. Rodrigo came on, with Guedes returning to his familiar left wing position.

Valencia had created close on zero. I think it was the 41st minute when Valencia even had a shot and that was a tame effort from Mina off target when he was well covered by the defender. The first Valencia shot on target came in injury time and what a shot. Parejo found Rodrigo who drove forward and found Guedes, who cut inside and, with Rodrigo complaining about not receiving a pass, hit a wonderful shot through the legs of the defender to beat the keeper at his near post. Nicely set up for Valencia to hit Betis on the counter in the second half.

==SECOND HALF==
Valencia got the second half off to a good start, from a short corner, the ball came to Guedes, who again ploughed a low drive through a group of defenders to give us a 2-goal lead. Valencia were looking better and more adventurous and looked comfortable. Last year, Valencia had been cruising: 4 up in the Villamarin before imploding in the 78th minute and conceding 3 goals in a short space of time. By coincidence, this happened again. First, Gabriel gave away a penalty to let them cut our lead. Then Rodrigo picked up the second of two stupid bookings to reduce us to 10 men and leave us with a nervy finish. Lo Celso should have had a second yellow but it didn't happen. Despite Betis peppering us with corners our defence held strong. Another decisive performance from Guedes.