Valencia's non-stop push on three fronts continues tonight. By the time of the Getafe game on 17 March, the team will have played 21 games in 72 days (!) Luckily, the team is now largely injury free. Garay is the only one out, while Roncaglia and Kondogbia are suspended. That leaves a squad of 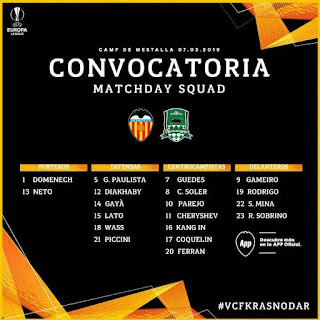 As I said in a previous post, Parejo and Gaya have played against another Krasnodar team, while Roncaglia and Wass came up against Krasnodar 2 years ago while playing for Celta, Wass scored in the first game. Despite that, they're an unknown quantity. Doing well in the Russian league and could win it. Russia's winter break ended last weekend and they achieved a decent draw at Spartak Moscow. The break could go two ways, it could mean they're fresher, but could also mean they're rusty. They usually play 4-1-4-1 or occasionally 4-2-3-1, so Valencia will have to be solid in the middle.

The considerations that could affect that are that only 2 central defenders are available and Parejo needs rest, in which case we could see Coquelin starting on the bench to conserve him in case we need a reserve defender, then replacing Parejo at half time.

A good win to nil is essential. If the team wants to have a good chance of progressing 2-0 or 3-0 is needed and that won't be easy.