A giant of Spanish football, having a disappointing season. A brief flirtation with relegation due to too many draws and serious difficulty in scoring goals, with the 25 scored the second lowest in the division. Nonetheless, some improved performances in 2019 have pushed the team up the table to the fringes of the European places, with one of the tightest defences in the league helping.

All said, Bilbao's situation will sound very familiar to Valencia fans. After an opening day win at home to Leganes, 8 draws and 5 defeats left the club in the bottom 3. Since Christmas, they've rallied, with a 6-4-1 record putting them 10th, one place behind us. Today's game is therefore crucial, we need to win to put distance between us and a challenger for the Europa league places and to capitalise on the slip-ups of teams ahead of us. Sevilla lost yesterday to bottom club Huesca. While Valencia fans will enjoy their travails, it's pointless if we can't capitalise. If we have any ambitions of 6th or higher, we need to win the home games. Especially when we consider the schedule ahead:

Bilbao will be tough, since a defeat in the Basque derby at the start of last month, they've won 2 and drawn 1 without conceding. Aduriz, who always seems to score against us, is injured. Inaki Williams will be the main focus of their attack, though he hasn't score in the last 6 games and is having a disappointing season overall. Other players who will pose a threat are central midfielder Raul Garcia, who has scored all their last 3 goals and left winger Iker Muniain.

Marcelino, at least can call on nearly a full squad. Kang-In, Lato and Sobrino have been left out, leaving 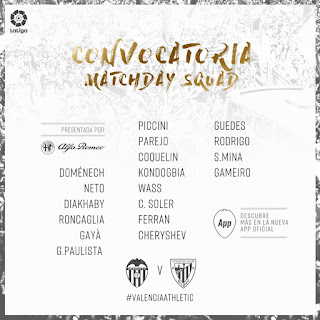 Neto will return, with Gaya on the left. In the centre, Diakhaby's rest means he'll likely start and probably with Gabriel. I'd expect Piccini to start on the right instead of Wass. In midfield, Chersyhev, Kondogbia and Soler all had some rest on Thursday, so expect to see them, with Parejo ever present and, at best, subbed off late in the second half if the game is going our way.

Up front, again, Mina's rest makes him favourite to start and it's a toss-up which of Rodrigo or Gameiro will partner. (I'd guess Rodrigo.)

A critical game. If we don't get the three points today then top 4 seems gone.

---------------------
Some quick comments post-game due to the late hour. Selection mostly as I predicted, I forgot that Roncaglia is banned for next two European games, so he started. A typical first half and not in a good way. Too many mishit passes, too much diddling around when we have the ball. The team lacked decisiveness. Good to see the tandem of Parejo and Kondogbia controlling the midfield. Diakhaby mostly secure, though Bilbao had a very good penalty shout turned down when he brought down their player. Looked like it to me.

Roncaglia probably his worst game so far but not awful. Disappointing half from the front four, there were numerous times when Parejo or Kondogbia or Wass had pushed up but had no through ball  available.

Great goal after the break, nice one two between Mina and Rodrigo and excellent volley from the latter. Still not secure but the team wrapped it up at the end with good link up between the three subs, Guedes finding Soler and great ball across the box for Gameiro to finish. Our forwards are finally starting to produce: 7 goals in 10 games for Rodrigo and 4 in 9 for Gameiro. Another home game coming up on Thursday against Krasnodar, but good to see the team back in European positions.
Posted by John Valenciacf at 1:55 PM
Email ThisBlogThis!Share to TwitterShare to FacebookShare to Pinterest
Labels: La Liga, match preview
Newer Post Older Post Home