Another lame and boring draw then.

In truth my throat is sore, firstly from shouting in anger at some of the tame and timid play we witnessed in much of that game, anger that the inevitable happened when they scored and then relief from celebrating. 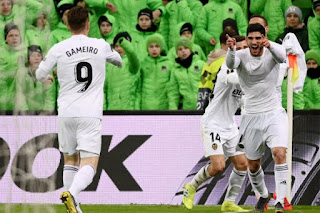 Make no mistake, though, we really rode our luck there and, I get tired of saying this, we can't keep on that way, as we are very soon going to get found out by one of the tougher opponents up ahead unless we change it around. 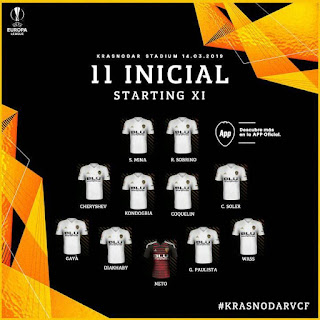 except up front. I expected at least one of Rodrigo or Gameiro to start, but Marcelino gambled on resting them for the Getafe game. A very dubious decision, I thought, and events certainly didn't justify it.

Marcelino said before the game that the team wouldn't be playing for 0-0. He lied. Instead the strategy was to play Russian roulette.

For most of the game Valencia lacked ambition. Passing was sloppy, there was too much blasting the ball aimlessly up front (I counted 4 times in the game when Neto simply kicked the ball up front to the opposing goalkeeper.) All the lost possession gave them ample time to attack.

Valencia's main chances came from a good ball across the box in the first half, which neither Mina nor Soler were able to capitalise on, and 2 headers from Gabriel. He really should have hit the target with one of them.

Trying to defend a single goal lead the whole game is a very high risk strategy and it looked like Valencia had been punished in the 84th minute when they scored an excellent goal.

Only then did Valencia finally wake up and the team's habit of scoring at the death was seen again. Gameiro getting to the by-line and cutting the ball back to Guedes, who finished an excellent team goal to put us into the quarters.

In conclusion, overjoyed as we may be at this, it's hard not to have mixed feelings. Apart from the last few minutes of this game and the first 30-35 of the first leg, the team produced a below average performance in this round and was lucky that we didn't have a harder draw. Coquelin was poor tonight and the front two ran around like headless chickens and certainly did their claims for a starting place no favours. Sobrino was mostly invisible while Mina nodded the ball on aimlessly, stood waiting for the ball coming to him and got dispossessed quickly. Neto also had an off day and was fortunate not to be tested more. No clue what Soler was doing but it wasn't helping. Marcelino's strategy of hoping for a 0-0 didn't work and nearly had the team knocked out. I said it last match report and I'll repeat: the team should not sit on one goal leads. We are not Atletico Madrid and should be putting games to bed.

On the plus sides, what a week for Guedes. After going off close to tears just 7 days ago he is now in his best moment of the season. Also, as I said last time, the team's morale is obviously good: this is the 7th time just in 2019, that the team has scored in the 90th minute or later. Draw for the quarter finals tomorrow. Chelsea and Napoli are definitely through, with Villarreal looking highly likely.