Valencia made a strong and determined effort to keep up their push for the most draws record today, only to fall at the last hurdle, Ferran spoiling the team's efforts with a last minute goal to give three points when all seemed lost. 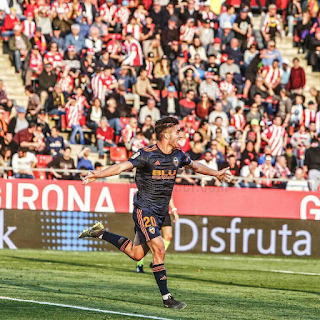 I expected more changes, but the only ones were Gaya replacing Lato, Roncaglia in place of Diakhaby and Ferran instead of Soler. All those changes would play their part for good or bad. 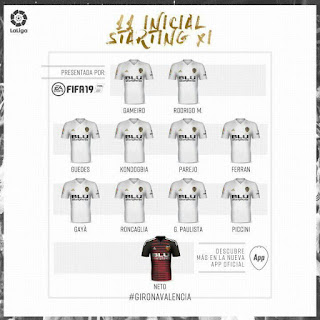 An even start saw Girona force a save low from Neto. Valencia broke the deadlock in the 13th minute, Gameiro challenging well for a header, Rodrigo picking up the ball and threading an excellent pass between the defence for Guedes to run on to and slot home for his first goal of the season.

Valencia blundered away the lead 8 minutes later. Stupid challenge from Gaya gave them a free kick at the edge of our area and we always seem to be weak at defending them. Girona hadn't scored at home in the league since 12 January, but not to worry, Valencia are in town. Poor marking from Kondogbia and they equalise. 1-1 at half time.

Valencia started the second half stronger and a shot from Guedes rebounded off the keeper, but a defender cleared it off the line. Guedes was involved in the next action, when his shot was blocked, Parejo hit a crisp shot inside the keeper's near post to restore our lead.

In the 61st minute the ref made a poor decision which nearly cost us the points, booking Roncaglia after a defender had kicked the ball against him. Free kick was fair, the booking wasn't and it made the difference 10 minutes later when Roncaglia overbalanced and stuck his foot up to bring the defender down, getting a second booking and reducing us to 10 men, which put us on the back foot.

Marcelino had taken off Rodrigo and Gameiro to rest them for next Thursday, so during the game our forward line went from Rodrigo-Gameiro to Rodrigo-Cheryshev to Cheryshev-Guedes before finally Ferran was playing in an unfamiliar position as lone forward. I understand the need to rest players, and to his credit, Marcelino has generally managed it well, but I'm not a fan of these makeshift and ever changing forward lines.

Diakhaby came on for Guedes and conceded a penalty which gave them the equaliser. Down to 10 men, with Girona attacking and Ferran as lone striker it didn't look good and looked more a question of whether we could hold the draw. However, Girona lost the ball, Kondogbia threaded the ball through to Ferran who used great pace to round the keeper, who seemed indecisive and caught in no man's land, to score and give Valencia a victory that had seemed unlikely.

Girona are the only team apart from Juventus to win at Mestalla this season, so beating them at their own patch gives us revenge against an annoying team. 4 wins in a row for Valencia in all competitions, unbeaten in 9 with the last defeat coming at Getafe in the cup in late January. A hard fought win but one which pushes Valencia to sixth temporarily. Sevilla are currently drawing with Sociedad at half time. If it stays that way (hopefully) Valencia will end the round in our highest position of the season, 6th with a 6-point gap separating us from Getafe in fourth. 2 huge games in the next week: the second leg with Krasnodar and then Getafe at Mestalla. At least the team is in winning mood and seems to have figured out how to score more than 1 goal in a game.