After an uninspiring win on Thursday, Valencia learned their Europa league rivals the following day... 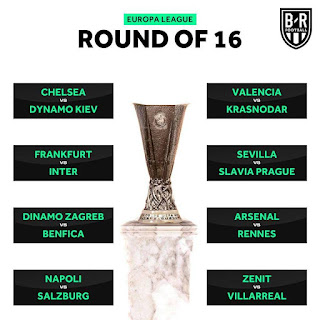 Krasnodar would probably have not been one of the top 8 teams that Valencia wanted to avoid, so it's a middling to easier opponent than what we could have got, but also one that can't be underestimated, since they beat an in-form Sevilla in the group stage and overcame Bayer Leverkusen on away goals in the round of 32. While the place seems obscure, and it is only the 16th biggest Russian city, weirdly, this is the second time in 6 seasons we'll have gone there. That was to play a different Krasnodar team, Kuban, who went bankrupt last year, in the Europa league groups in late 2013. Parejo played on that occasion with Jaume an unused sub, with Gaya featuring in the Mestalla leg. Bankrolled by a Russian billionaire oligarch, they're 2nd in the Russian league and will provide a tricky test and an annoyingly long journey.

Sevilla's were top of the table in early December but defeat today to Barcelona means they have now a record of 1-1-5 in their last 7 games and have slipped out of the top 4. It's imperative that we take advantage by winning tomorrow. Winning games like these against Leganes are exactly the type of games that make the difference between top4 and also rans. It won't be easy: Leganes haven't lost at home in over 5 months.

At least Marcelino has a nearly full squad to draw on at last. Garay and Mina are the only absentees, and the latter's injury is minor. Piccini, Rodrigo and Gabriel all return, with Diakhaby available again after serving his 4-game suspension. 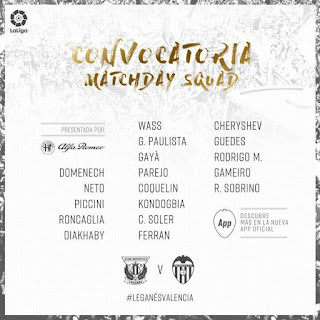 I suspect Marcelino will have one eye on Thursday's Copa del Rey game, so predicting the line-up is difficult. But I'd expect Neto in goal. In defence, we'll likely see Gaya-Diakhaby-Roncaglia-Piccini, though it will depend on the fitness of Piccini and Gabriel. In midfield of Cheryshev and Kondogbia, who didn't play on Thursday, should play, with Parejo ever present. Right wing will be interesting: I think Marcelino may go with Ferran and save Soler for Thursday, or we may see Wass there. Up front, I'd expect Rodrigo to be eased back in as a second hand sub. Gameiro should definitely start and then the interesting thing will be if Marcelino tries Guedes there, or sticks with Sobrino.