Valencia started their Copa del Rey campaign in Zaragoza, coincidentally in exactly the same stadium where they started it last year. Comparisons with last season pretty much end there. Sure, the team did manage their first win in just over a month but as ever it's on the back of a performance which leaves little to celebrate and the game did nothing to wash away the bad taste that's been building up. On the contrary, it was just more evidence that this team has seriously lost the plot as we scraped to a 1-goal win over a team that is bottom of the third level and that despite having a man advantage for over an hour.

No surprises in the line-up 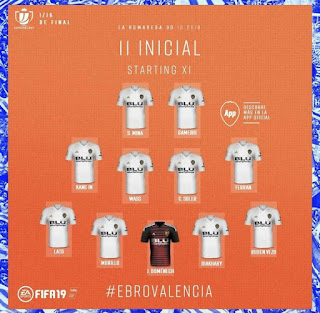 Kang-in, as expected, started his first official game but aside from that, knowing the team absolutely had to win this one Marcelino played it safe, giving game time to first team players who have been less active recently like Lato, Murillo, Diakhaby, Ferran and Wass.

Kang-In was active in the early period, often for the wrong reasons, as his enthusiasm and lack of experience caused several fouls and he was lucky to escape a booking by a card happy referee. Ebro for the most part were happy to sit back in a 5-4-1 asking what Valencia could do. As we all know, the answer to that this season has been nothing and no different here. Despite lots of possession there was little created and the first clear chance actually fell to them. Wass screwed up in possession, did at least get a tackle in, but the ball bounced through only for Murillo to save us with an inch perfect last ditch tackle.

Our first clear chance fell to Gameiro, who did well to recover the ball, but his shot was straight at the keeper. In minute 30, the ref did us a favour, sending their player off for a second yellow. I thought both his yellows were a bit harsh to be fair. An hour to play, surely that could motivate us and give us the edge? Nope. What followed had shades of the Juventus game, with the difference that we were playing a team bottom of the Spanish third level rather than one of the best teams in the world. We passed around a bit but rarely created anything of note.

At half time, Marcelino subbed off Gameiro for Bats. I was a bit disappointed at that one as I thought this was one game where we could have risked taking off a defender for a midfielder or forward given the man advantage. After another tepid 15 minutes of the second half with Valencia looking clueless as ever, Ebro took the lead with probably only their second chance of the game. Lato fell to the ground too easily, and this let their player power a header home at the back post. Disgraceful stuff. Coquelin came on for Vezo with Wass covering at right back.

Mina would save us with a couple of good goals. Cutting inside for the first then curling a shot past the keeper for the first. Then for the second scoring a header from a good cross by Wass to save our blushes.

In terms of players, Jaume had barely anything to do and can't really be blamed for the goal. Vezo was average. Diakhaby had a really good game, was solid and passed the ball out from the back well. Murillo was alright. Lato was a big disappointment, doesn't seem to have progressed from last season and the quality gap between him and Gaya has widened.

Kang-In is a diamond in the rough. Has great potential but lacks experience and didn't look fully comfortable on the wing, he drifted inside at times. Wass had a couple of good moments, the assist and a stinging shot from distance which the keeper did well to save.

Mina was one of the few bright spots but 4 seasons in would need to show more consistency. Gameiro and Bats did little to impress as usual.