Firstly, a bit of news which passed us by last week. Valencia bought Jeison Murillo outright. We had until 30 June 2019 to exercise the compulsory buy under his loan deal. Murillo has always been well rated by fans but has found opportunities limited. He was out injured for 3 months last year and when he came back he was paired with Gabriel, as Garay was then injured. When the latter returned, Murillo was then dropped to the bench. It's pretty clear that Marcelino's preferred central defence duo is Garay and Gabriel and it now seems that Diakhaby may be the third choice as he was preferred for the Atletico game, with Murillo not even making the squad. So the timing of this one is a bit weird. But with extra games this season, hopefully Murillo will get his chance.

Superdeporte claim that Valencia are in negotiations to sign Lenny Pintor (Transfermarkt profile here) from France's second division. Pintor has just turned 18, plays as a left winger mainly but can also fit in on the right wing and as a secondary striker. This seems like another of Pablo Longoria's future investments and would be very much a depth/prospect type player along the lines of Uros Racic or Diakhaby. On the left wing, the Guedes saga drags on and for now it looks like no more than 50/50 that he'll join us. PSG are refusing to budge from their demand of 60-70m, a price beyond Valencia's means. A second loan seems out of the question. With the transfer window closing on 31 August, at least we'll know for sure soon. Alemany has said he is ready in case we don't get Guedes, so presumably we will have another left winger in mind apart from Pintor.

Similarly, despite continued links with Real Madrid, it looks unlikely that Rodrigo is going anywhere. While Lopetegui seems keen on bringing him, the Real Madrid fanbase and RM president seem unconvinced, especially since Alemany is insisting on the clause of 120m.

Rodrigo, along with Parejo, Gaya, Soler and Santi Mina is in Luis Enrique's preliminary list of 65 players for the forthcoming Nations League games. That list will be cut to 23, and Mina and Soler and probably Gaya at least would probably be among the players cut, but it's a sign that some of our talents are on the fringes and at least in the running.

Lastly, the final qualifying round of the Champions league is being played this week and next. This is the provisional situation 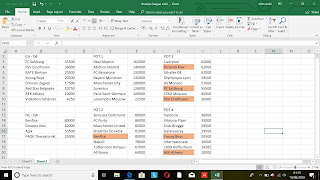 Valencia still need one of Benfica, Salzburg or PSV to be eliminated in order to make Pot 3 which would give us a better chance of an easier draw.. Last night's first leg results were:

PSV are strong favourites to go through and Salzburg in control, so our best chance seems to be PAOK beating Benfica. The draw for the group stage will take place next Thursday, 30 August. Time hasn't been confirmed but it's been at 18:00 Spanish time in previous years.