The first game of the season was always going to be a challenging one. It's normally challenging to compete after a long break from a competitive fixtures. This game was made even more challenging by the level and quality of the opponent in such a fixture. We came to this game on the back of an impressive and definitive 3-0 victory at home against Bayer Leverkusen, as well as the obvious home advantage. Atletico came into the game with a 4-2 title win in the UEFA Super Cup against Real Madrid; which was a definite confidence boost and a good segway into competitive fixtures, while on the other hand, causing some fatigue. 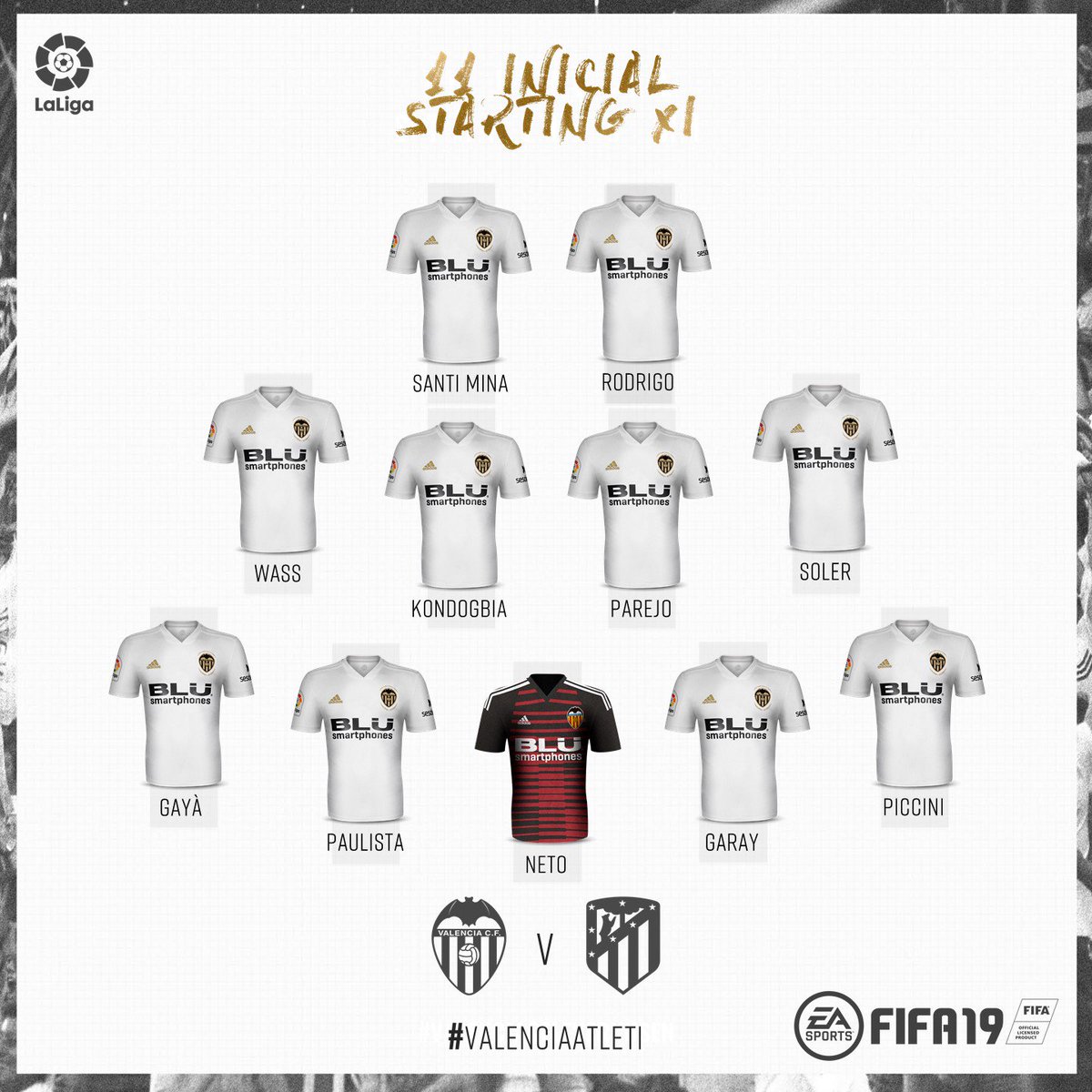 Marcelino stayed loyal to his 4-4-2 formation and went for a familiar lineup with two notable differences, both new signings. Santi Mina and Rodrigo were chosen to start ahead of any new signings which is reasonable as he has had a lot more time to work with them. The left wing was the position which I was most looking forward to seeing who would be chosen to play in, with both Wass and Cheryshev available. Again, the one with the more time to work with was chosen. Kondogbia, Parejo and Soler, which were so instrumental last year, completed the midfield. In defence, Piccini was the new face of the right-back position, with Gaya, Paulista and Garay retaining their starting roles in front of Neto.

The first half was a tight affair. Both sides took turns passing the ball around and possession was exchanged several times. Valencia had a few shots from distance from Wass 4 minutes in and from Rodrigo 12 minutes later. The efforts were pretty close enough to get a thought from Oblak but not on target.

Into the quarter of the game, where Valencia was looking like the slightly better team, Atletico would be the one to break the deadlock 25 minutes in. Three or four players were all drawn to Griezmann, leaving a gaping hole in the middle, which a player of his quality could pass the ball through and into Correa who beat Neto at his near post. Defence in shambles, Neto with an unconvincing dive.

Diego Costa was causing quite a few problems to Paulista and Gaya with quick changes in direction and his strength. Nearing the end of the first half, he would be played through into acres of space with only Garay remotely close to him. Garay opted to take him down, I feared a red card but thankfully the referee thought it only deserved a yellow.

Valencia would get back into the game 15 minutes into the second half. Kondogbia, who had been relatively quiet in the game in terms of daring passes and dribbles, played a long ball out wide to Daniel Wass, who squared it back across into the box where Rodrigo would take Godin out with a shoulder touch into space after which he smashed the ball into the roof of the net, with Oblak sent completely the wrong way. It was a brilliant move with a lot of vision and technique from Kondogbia and Wass, with Rodrigo showing awareness and great finishing.

With Mestalla now roaring the players into action, the players responded well. Paulista hit the post with a header following a set-piece from Parejo less than 10 minutes after the goal. At this point, Marcelino opted to take off Garay, who had been booked already, was involved in another foul that could've seen him sent off, and suffering from discomfort, for new signing Diakhaby. This would allow us to carry on forward confidently without the risk of injury or a sending off. Santi Mina was also taken off for Gameiro probably due to a fading presence in the game. A few minutes later, a third new signing in Batsuhayi to replace Soler.

The changes looked to further spark the team into motion, with Marcelino clearly intent on getting the win. However, it would be Atletico who would cause danger first following a corner kick which Savic connected with cleanly, only for him to put it to the left of Neto's goal.

The last ten minutes of the game was all Valencia. Batshuyai and Gamerio were causing trouble for the Atletico defense with their pace and movement. In a 3 on 2 break, Batshuyai would carry the ball forward well, draw the defenders, play a great ball for Wass who unfortunately could not beat Oblak from that angle. Missed chance to get a win.

Batshuyai would threaten again with an effort from range a few minutes earlier. Valencia would get one last great chance in the dying minutes of the game with Gameiro being played into space by Batshuyai again, only for Oblak to deny him a goal on his debut against his old team.

Neto 6 - I think he could've done slightly better for the goal, but mostly the defense's fault. Pulled off a great save to deny Diego Costa by the smallest of margins.
Piccini 5 - decent game, would've liked him to get forward more since he poses a lot of threat from crosses. He was denied the time or space to do so.
Garay 4.5 - the booking was a tactical foul and needed to be made. He got away with only a yellow which was good, but proceeded to play with fire and could've got sent off.
Paulista 4 - very slow to react to in the first goal, leaving lots of space. Troubled by the opposing attack on plenty of occasions. Did good to get a dangerous header in from a Parejo corner. Maybe should've scored.
Gaya 7 - very active both defensively and offensively. Kept up well with the pace of the game and the Atletico players. Even late in the game was keeping up with Gelson Martins's pace and dribbling.
Kondogbia 6.5 - quiet in the first half and kept it simple. Stepped up a gear in the second half when it counted by picking out a wonderful long ball to Wass out wide.
Parejo 8 - I was really impressed with him today. He won the ball back quite cleanly with a couple of great sliding challenges. Carried the ball well, kept possession, passing was sharp, and almost assisted a Paulista goal via a corner.
Soler 6 - drew a foul from Felipe Luis to deal with his pace. His effort on goal was confident but a ways off. Could've looked up and picked out a pass to players in space instead.
Wass 7 - great debut. The work ethic was there, great vision to assist Rodrigo with a wonderful ball from out wide. He really needed to finish the one chance he had in the final minutes of the game, it would've topped off a great performance.
Rodrigo 7.5 - full of energy. Wanted a go at goal at every opportunity he could get. A few good efforts from range and some great dribbles caused some worry for Atletico. Great control and awareness to finish Wass's pass.
Santi Mina 4.5 - too quiet. At times I forgot he was even there. Got one header in but didn't trouble too much otherwise.

Subs:
Diakhaby 6 - covered well for Garay, was quick to clean up any trouble.
Gamerio 6 - professional against his old team, he went out to score and almost did.
Batshuyai 6.5 - generated three or four dangerous plays in the short time he was on the field, looks really promising.

This Atletico side is a tough one, they always give us plenty of trouble and tonight was no exception. They came off the back of a title win and pretty convincingly against Real Madrid. Beating them was always going to be a tough affair and I can confidently say that we should've won. We had the chances to do so, especially late in the second half. We had a tough opening fixture and a team that is still getting familiar with on another, whereas they are in the later stages of a long-term project. We did well minus the win, but against this side a draw is not a bad result either. The few next fixtures are relatively easier. Next Sunday, we are away to Espanyol and I believe we can manage a win.

As usual, let everyone know your ideas, thoughts and comments about the game in the comments below. Was Garay's challenge a yellow or red card? How did the new signings do? Who impressed? Who disappointed?
Posted by Amunt.Valencia at 5:24 AM
Email ThisBlogThis!Share to TwitterShare to FacebookShare to Pinterest
Labels: La Liga, match report, player ratings, results
Newer Post Older Post Home