Valencia announced today that Denis Cheryshev will rejoin the club. It's a loan for this season and sources disagree on what will happen next summer, whether there's a buy option and whether it's compulsory or not. 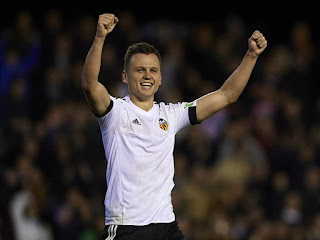 The news came as a real surprise. All our previous signings had been linked well before, but this just dropped without warning. Just this morning the Valencian sports press were talking about Ivan Falque of Torino as a possible reinforcement on the left. Like the Gameiro signing this one will have its critics.

His previous loan with us at the start of 2016, during the ill-fated Gary Neville era shows the pros and cons. He played six games and did really well. He scored the late winner against Espanyol, ending a long winless run for us and scored a good equaliser against Atletico Madrid (though we went on to lose) with another winner and assist against Malaga. But he suffered a hamstring injury 6 weeks into his loan for us and a sub appearance against Villarreal would prove his last game, as he was operated on after that and Valencia didn't pursue his signing due to worries about his injuries.

Marcelino then took him to Villarreal where it's been a similar story. He missed 32 of 51 games in 2016/17 due to injury and 11 of 46 last year. His best moment came in the world cup: with 4 goals in 5 games he is widely agreed to be one of the best XI from that tournament.

So there's the issue. When he's fit, he's a great player with good pace, a good eye for goal and lots of experience in Spain, but he seems very injury-prone. However, this loan (signing?) seems to be in addition to Guedes rather than instead of him. It also reduces the pressure to secure a quick deal for Guedes. In the absolute worst case scenario and the Guedes deal falls through we have Cheryshev and Wass at least to cover the left wing. With Guedes, we'll have a decent and experienced alternative, so I'm mostly optimistic about this, especially since he's worked with Marcelino before.

What do you think? Good or could we have done better?
Posted by John Valenciacf at 6:39 PM
Email ThisBlogThis!Share to TwitterShare to FacebookShare to Pinterest
Labels: official transfers, Players
Newer Post Older Post Home