Daniel Wass and other transfers

Valencia have today confirmed the signing of Daniel Wass from Celta. 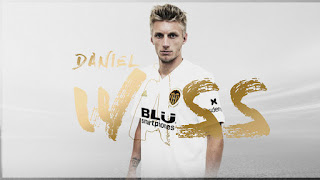 He signs a 4-year contact, with an €80m release clause, with the transfer fee reported as €6m plus another possible million based on performances. Wass had a decent season at Celta, scoring 4 goals and providing 9 assists. He's the type of versatile player that Marcelino likes, as he can play centre midfield, attacking midfield, right wing and right back. Signing an experienced player of this level, who'd have been worth 15m had he not been in the last year of his contract, looks like good business to me.

The signing of Kevin Gameiro looks imminent and should be confirmed this week.

The other that the club would like is, of course, Guedes, but there's a feeling now that that's not going to happen. PSG have constantly procrastinated over that one. When Lim offered 30m, they said they'd only do business for 35m. When that was offered, PSG said 40m and now that has been on the table for months they've hinted that they want more. Unfortunately, it's time to move on from that one, unless a repeat loan deal can be struck.

There have also been a few departures. Bakkali has returned to Belgium, signing for Anderlecht for around €1.5m. His time with us was similar to Rodrigo de Paul or Fede. A flair player who was popular with fans, but who never managed to reach the level necessary.

In a similar boat is Tropi, who made a small breakthrough under Nuno, making a couple of sub appearances, but couldn't progress beyond that. After a couple of seasons on loan in the Segunda his contract expired at the end of June and he is now looking for a new club.

Lastly, Eugeni Valderrama has signed for newly promoted Huesca, with Valencia retaining a buy back clause and a percentage of any future sale. The club is also pushing Nani towards the exit door, with Portugal and Turkey being possible destinations. Most likely, he'll leave for free as he is in the last year of contract in order to get his high salary off the books. Zaza is also being offered to potential buyers. The club is asking 25m, though we'd probably do business at 20. Mina and Rodrigo could also leave if the price is right.