I know not everybody will agree with me but I thought it was a pretty good performance today.  It is not easy winning at Girona  as many clubs have discovered this season and with so many changes in the team another loss was not an impossibility. Neither team had anything but pride to play for so I was expecting that we may have had a boring game.  The only problem with the game today is that just when the management have probably got a good idea who will stay and who will go some players have stepped up and sewn some doubts. 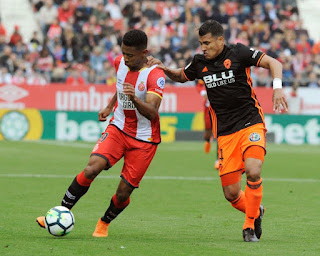 With a back line of Montoya, Vezo, Murillo and Lato. Jaume in goal,  Midfield with Soler Maksimovic Torres and Guedes  and forwards with Vietto and Zaza.

Not many chances were made by either side but Girona did hit the post and Soler missed an almost open goal when set up by Zaza.  Even though there were not too many opportunities players such as Maksimovic and Torres showing that they are quite capable of playing at the higher level.

It was good to see Murillo back playing after not seeing too much of him recently and he was having a decent game although caught for speed on one occasion.  Jaume looked comfortable enough in goal and made 2 or 3 good saves but was not troubled too much.

I have a suspicion Guedes was told to play rubbish to keep his price down as again today he just couldn't get anything right. His control was awful and he just seemed to hang on to the ball too much. To be fair he had a couple of decent long shots that were actually on target but did not cause their keeper too much trouble. 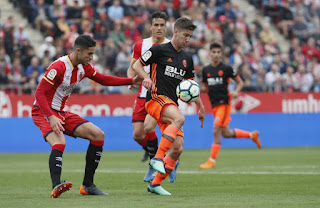 With Kondogbia out through injury and Parejo through suspension the midfield seemed to be able to cope well enough. Maffeo the right back for Girona was looking very lively and the talk is that we could be taking him next season from Man City for around 7 million euros as he is on loan at Girona but Man City don't want him back. Might be a good purchase.

The highlight of the game came in minute 60 when Vietto, who was having a good game, picked up the ball just outside his own area and ran the length of the field. Players either side drew off defenders allowing him to pick his spot with a great shot just inside the post. A great goal with a great performance of today.  There was no way back now for the home team and Valencia held on to be worthy winners without being worried too much.

After a run of 5 games without a win it was a very welcome 3 points and good for the moral of the team and supporters.

Jaume 7   Not troubled too much but made some good saves when called upon. Always looks confident and will be an asset next season again for backup or number 1.

Montoya 6.0  Rarely seemed to be troubled and given an unusual away game. Had a decent run which almost created a chance

Vezo  7  Did not put a foot wrong today his defending was good and his ball out of defence was faultless. He has to stay and I would not be surprised if he went to the World Cup.

Murillo 6.5  Good to see him back. Good strong player although a little short of pace sometimes his experience is welcome.

Lato 6.0  Still looks a bit raw at times but a tough little player. Got needlesly booked but looked ok.

Ferran 6.5  Looking better each game which is to be expected. Helped out well in defence also at times.

Soler  6.0   Had a decent game but loses marks for missing the sitter when trying too much to place it when perhaps a blast would have been better.

Maksimovic 7  He has to stay.  Worked hard in the middle and compensated well for the missing Kondogbia. I like his strength and ability to win balls in the air also. Looks calm and confident.

Guedes 5  Surely he cannot be this bad without trying. Not a shadow of the player we saw before Christmas and at 40 million PSG must be laughing if we pay that on this performance.

Vietto 7   Great performance even without the goal I was thinking how well he was playing before he actually scored.  Somebody has to decide now about him. Such a shame he was whistled off a few weeks ago. He looked so happy when he scored I really felt for him.

Zaza  5.0  Described by some West Ham supporters as crap when he played there.  What has happened to him.  He looks moody and uninterested.  He has gone from my hero to a player I would like to see the back of after his recent performances. Today he was awful.

Subs Rodrigo for Zaza
Vidal for Lato
Gaya for Torres

Inter have stated that they will not be taking up the option of purchasing Cancelo whether or not they attain Champions League status. In that case he will return to Valencia next week and his future will be decided in due course.  Could be good news for us with either he stays or perhaps better still he goes for nearer 50 million euros.

Also,  Andreas Pereira  has returned to Man United.  He was injured in that farcical encounter in Saudi and will not be fit for a couple of weeks.  It is not expected that he will return to Valencia, which perhaps is also a bit of good news.