We were discussing before the game what the score would be 3-1 maybe 3-2 maybe 2-1 but nobody around me said it would be only our second 0-0 of the season, the first being against Athletico Madrid the beginning of September last year.

The wind was always going to be a big factor today as it was swirling round the Mestalla causing all sorts of problems with high balls. A win was all that was needed and that would take us to the Champions League. A point should be enough but we shall see.

Valencia started of brightly with a lineup with Vezo perhaps surprisingly preferred to Murilllo partnering Gabriel in the centre of defence. Apart from that the lineup was as expected with Mina also preferred to Zaza. Motoya was preferred at right back and justified his inclusion with a solid display.

It was to be another frustrating afternoon for Valencia with chance after chance being created but not being taken. I would have to see the game again and make notes of the missed chances as there were so many. Roodrigo, Guedes, Soler, all had good opportunities but with lack of finesse or lack of luck or good goalkeeping from ex Valencia keeper Yoel keeping them out. 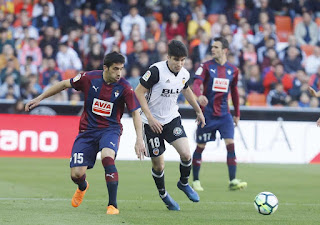 Peter Lim was there and is yet to his his team win this season, so Peter stay away please you are bringing bad luck.
Soler looked to have a good shout for a penalty but on seeing the reply the ref got it right. Zaza  had what looked like a good goal ruled out for offside but his hand was offside. ridiculous rule really. When are strikers going to learn not to reach forward with their arms on theses marginal decisions.

Ian Marquez  the Eibar captain was forced to retire ten minutes from the end leaving them with a player short but it just made them defend deeper and we could not take advantage. 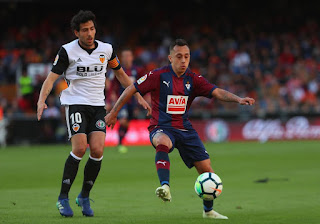 All in all a disappointing end to the game. It would have been nice to have secured C.L. at home but it may be secured tonight if Malaga can take a point at Betis. Betis need to win all their last 4 games to have an outside chance of taking 4th place.

Neto 6   Made a great save from Pedro Leon on his near post from nearly 30 metres injuring his knee on the post.

Montoya 6.5   Good solid display and made some great last ditch tackles to save the day. Will he go, will he stay. I hope he stays.

Vezo 6.5    Justified his selection over Murillo with a good display. Made one bad pass out to Kondogbia but apart from that looked cool.

Gaya 7   Hard working as usual in defence and going forward. Beginning to improve understanding with Guedes.

Parejo 7  Good to see him back, picked up a silly yellow for arguing with ref but worked well.

Soler  6..5   He needs to improve in front of goal. Had a couple of chances where he tried to get the ball on to his stronger foot instead of just burying it.

Guedes 7  Hard to rate him but always gives his all with his runs but often takes the wrong decisions. Sometimes looks worth 40 mil then looks more like 4 mil. He has time to improve as I am sure he will.

Kondogbia 8  Easy to score him each week as he is the powerhouse of the midfield. Defending and attacking all over the pitch

Rodrigo 7  unlucky not to have had a goal or two. Maybe could have held the ball up a number of times but if he had we would all be saying he should have had a shot.

Mina 5.5  Best be forgotten display again. He needs a goal to justify his place and it didn't happen again today.

Zaza 6.5  Not on for long but got a goal that was unluckily disallowed.  The team seem to spark more when he came on for Santi Mina.

Torres 6.5   Only on for a short time but got in a good cross and this will do his confidence good. Hopefully see more of him this season.