I think most of us who follow Valencia and La Liga had expected the same thing from this game: a tight game against a defence-minded opponent, with Valencia probably grinding out a 1-0 win. Consider this: in their first 9 games, Leganes had kept six clean sheets, conceding just a single goal in the other three, before losing 1-2 to Sevilla last week. Five goals in the first ten is a defensive record bettered only by Barcelona, so a 3-0 win against them is definitely something to write home about. We can all grumble about aspects of the game, but this Valencia side continues to vastly exceed expectations and equal records from the 1940s. 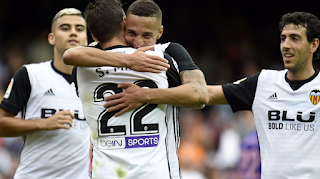 For better and worse, most of Valencia's team practically picks itself these days. Neto in goal, Gaya at left back, a midfield of Guedes - Kondogbia - Parejo - Soler with Zaza and Rodrigo up front. Montoya usually starts over Vidal as he did today and the only question being who will play odd man out among the trio of Garay, Gabriel and Murillo. The coach seems to prefer them in that order, but it was Garay and Murillo today. Even the subs are a bit predictable, Mina and Pereira will come on at some point, with Lato most likely to be next. Why change what works?

Leganes did indeed set up defensively and showed that their unexpectedly high league position is no fluke with a gritty performance. Valencia had few chances in the early period and it took a set piece to break the deadlock. Guedes played a nice one-two with Zaza and was fouled while breaking into the box. With Parejo sizing up in his usual territory, we all expected him to curl it over the wall towards the corner. Leganes had done their homework and expected the same, with the wall all jumping. Parejo hit a really excellent free kick under the wall into the bottom corner. A key goal at a key moment, as Leganes would otherwise have been more than happy to frustrate us for longer and wait for chances.

That goal forced Leganes to come out of their shell and they were the better team in the first half. In the 17th minute they played a dangerous ball down our right side, with Montoya caught out a little, but Murillo covered. Szymanowski had been one of their most threatening players and he shot over in the 32nd minute when he could have really hit the target. Beauvue produced worse before half time, shooting over with the goal at his mercy. Not a good last 15 minutes for Valencia.

Luckily, it turned out to be a blip. Valencia came out stronger in the second part. Guedes was ruled offside after a good through ball. Minutes later, he nearly scored. Great interception from Gaya, Parejo found Rodrigo and an excellent pass from him gave Guedes the chance, he cut inside so well, but hit the post.

Leganes had a few chances of their own, the Valencia defence wasn't covering itself in glory and another ball through the middle channel was only half cut out by Murillo, with Neto forced to make a save one-on-one. A speculative shot from 35 metres, which had as much chance of beating Neto as I have of playing for Valencia next season, and a dangerous free kick, saved by Neto, represented their best efforts.

Valencia killed things off in the last 20 minutes. Pereira replaced Soler in the 65th minute and was involved soon after when we scored the second goal in the 70th minute on a counter attack. Quality stuff from Kondogbia, who made a driving run from deep, holding the ball up long enough to pass out to Pereira, whose pinpoint cross was headed home by Rodrigo.

The only slight negative was in minute 78 when Zaza was subbed off, thus missing the chance to equal the record for consecutive games scored in. He was understandably furious, but public displays of petulance like that don't help the team. Mina, who replaced him, soon justified his place by winning and scoring a penalty.

Cynics might say we rode our luck a little. The defence looked suspect at times, most notably. But good teams make their own luck, forcing errors from the opponents and clinically finishing them. That's exactly what this season's Valencia does, when last season's would have lost 0-1 to a 60th minute goal, or conceded a demoralising last minute equaliser. Tonight's win guarantees that the game against Barcelona will be a top two clash. Hard to think of any better way to build the Valencia brand.

PLAYER RATINGS
Neto 7 - a couple of crucial stops as ever and has been an essential part of this team
Gaya 6.5 - best of the defence, screened his side well
Garay 6 - never looked fully secure, but won a couple of aerial balls
Murillo 5.5 - a couple of blunders to cancel out a couple of key tackles
Montoya 5.5 - just not his season so far, with Leganes mounting a couple of attacks down his side
Guedes 6 - provided some great moments, but also a few moments of selfishness (minute 57) when he went for goal with players better placed
Kondogbia 7 - key presence as always and crucial contribution to the second goal
Parejo 7.5 - calm and controlling presence in the centre and excellent free kick goal
Soler 6 - didn't happen for him today and he's been below form for most of the last month
Rodrigo 7.5 - excellent performance, in superb form at the moment, scoring and creating
Zaza 6 - worked hard but didn't get the service

SUBS
Pereira 7.5 - excellent cameo, proved to be far better than Soler on the right, hopefully we can use him for the whole season
Mina 7 - having a very good season, did well to win and convert the penalty
Lato N/A - not enough time
Posted by John Valenciacf at 10:32 PM
Email ThisBlogThis!Share to TwitterShare to FacebookShare to Pinterest
Labels: match report, player ratings
Newer Post Older Post Home