Rodrigo renews his contract until 2022

Valencia today announced the renewal of Rodrigo Moreno's contract. It was due to expire in 2019, meaning that Rodrigo would be able to negotiate with other clubs a year from now and could start pushing the club towards favourable terms come next summer. Having had bad experiences in recent years with Feghouli and going through the same situation with Rafa Mir, the club seems to have learned from its mistakes, giving Rodrigo a 3-year extension until 2022 and doubling his release clause from 60m to 120m. 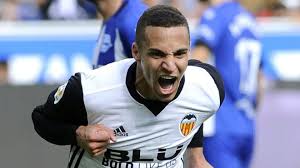 Rodrigo joined Valencia as one of the newly arrived Peter Lim's first signings and it's fair to say that his early years were a massive disappointment, given that he remains Valencia's record signing, for 30m. His finishing remains a weak spot but he does bring numerous strengths to the team: good link up play, dribbling at defenders, a talent in the air and pace and the ability to attack space and drag defenders out of the way to create space for others to exploit. Some of these, especially his heading ability, have only become obvious this season, but at 26, he is in his prime and can offer Valencia several good years.

Played on the wing in his first two seasons and as lone forward last season until his injury, he has excelled this season as secondary striker to Zaza, and it's obvious that that's his best role. He still needs to maintain this level to regain the full confidence of our fans, but his hard work has always been obvious and this seems like a move which puts control of his future into the hands of the club.

It's incredibly hard to imagine anyone paying the 120m for him. In early October Superdeporte had a story that Man City had had a 35m offer for him rejected in the Summer. That was rightly laughed off as nonsense and denied by Marcelino but I don't think it would be now, as it was incredibly hard to imagine at the start of the season that he would be the fourth highest scorer in La Liga and a Spain international. So it's time to forget what happened with him (and the rest of the team) the previous two seasons and give him a second chance, which his performances so far have more than justified.