In the post-match period after Barcelona, the talk, disappointingly, has been focused on the refereeing decision. It's a shame this has overshadowed what was actually a decent second half performance from Valencia. We turned the tables on them in the second half, surprised them and nearly won. The crying about the referee from their fans is actually pretty grating, given the previous two league games at Mestalla. Last year, Messi scored while Suarez was clearly offside and interfering. He even jumped over the ball to let it go under him. Barca won 3-2 due to a last minute penalty. 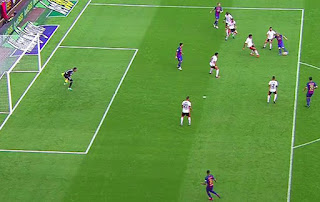 2015, a similar story. Suarez was offside when he scored their only goal in a 1-1 result. 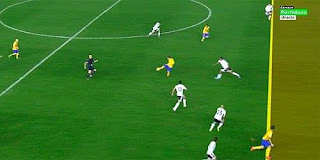 Suarez' reaction to the ghost goal the other night was apparently to call the linesman "a shit" and "a fucking midget." Two wrongs don't make a right and Rodrigo was sent off for less a couple of seasons ago.

I don't remember the same outcry those times from a media which all too often loves to fawn over Barcelona. People will argue forever about whether the Spanish or English top flights are better, but the standard of refereeing in England is unquestionably superior and is something that La Liga desperately needs to improve.

Now that the game is out of the way, the focus has shifted to strengthening the squad, which is beginning to show its first signs of wear and tear. Guedes suffered a broken toe *before* the Barcelona game and is out for 4 weeks. He might be back for the Villarreal game, but that's 50/50 and he'd probably only be a sub. Zaza will likely need a knee operation sooner rather than later and that will result in 5-6 weeks out. Murillo is out until late January and Garay will miss at least the next game at Getafe. With Jimenez also out to a long term injury, defence, which looked the best covered position now has to make do with Vezo and Paulista with a Mestalla player as a cover. Ivan Marquez is one possibility, with Zotko another and this week's Copa game will allow the coach to assess alternatives.

Peter Lim has been in Valencia discussing future transfer options (he will also go to Paris to try to prolong Guedes' loan.) The two main positions that the club are looking to fill is a forward, with Sandro the favourite and a cover for Kondogbia. Third priority was a right back, as Marcelino hasn't been totally convinced by either Montoya or Nacho Vidal, which I think is a shame, since any signing will hamper Vidal's progress. The possibility of a central defender has now entered the agenda, while the club remains open to adding a winger.

The club today announced the winter departure of Fabian Orellana. Eibar will pay 400,000 to take him on loan until Summer and will then have to pay another 1.8m to compulsorily buy him if they avoid relegation. Orellana got off to a great start at Valencia, but after the first 3 games it all went downhill and despite a good preseason, Marcelino remained unconvinced.

Lastly, the club is negotiating a contract extension with Dani Parejo. His contract expires in June 2020 and the club is looking to extend that to June 2021, with the club having the option of adding a further year as Parejo would be 32 when that expires. I can't see the point in this, really. He's having a decent season, but what's the rush? Wouldn't it be best to wait until the end of next year and then start talking?

The club has a relatively easy schedule in December. Getafe away, Celta home, Eibar away then the toughest game, Villarreal at home. However, progress in the Copa would require the team to play every midweek in January and that will need a deeper squad.
Posted by John Valenciacf at 9:02 PM
Email ThisBlogThis!Share to TwitterShare to FacebookShare to Pinterest
Labels: official transfers, opinion, transfer speculations
Newer Post Older Post Home