A few rumours swirling around regarding possible future transfers, as usual treat these with healthy scepticism until anything is confirmed.

Peter Lim was in Valencia for the Barcelona game and is in Paris this week to try to prolong Guedes' stay. Superdeporte claim that Lim is aiming to sign Guedes permanently rather than on loan. This looks hugely unlikely, but his good relations with the PSG owner and their Financial Fair Play issues turn it from an impossibility into a very low chance.

Less positively, El Gol Digital claims that Valencia will buy Kondogbia then give him to PSG in part-exchange for Guedes. While that story is almost certainly journalistic creativity at best, it wouldn't be a good move. Guedes is a great player, but Kondogbia is the backbone of the Valencia team and he must be the priority. So, rather more likely, Plazadeportiva, usually a more reliable source, weighs in with better news. It claims that Alemany had wanted to pay 18m for Kondogbia. Inter wanted at least 30m. So a compromise was struck for 25m with Inter getting 20% of any sell-on. Crucially, Alemany negotiated a convenient payment structure: Valencia will pay 7m next July and 6m in July of the three years after that. That would be a very nice deal. 25m next summer would affect our ability to bring in other reinforcements, especially since we will have to pay the final instalment of 8m for Zaza. 7m is doable.

Related to all this is the situation of Cancelo, who isn't playing much at Inter, who have a 32m buy option on him. (Presumably this would also be paid to us over 4 years.) COPE claim that Valencia are considering bringing the player back in January, so that he won't lose value, as Inter are unlikely to buy him given that he's only played a minor role for them so far. This is possible, but dubious, as it's hard to see where he'd fit in. He was never that great as a right back and, even though Marcelino seems to have doubts about Montoya and Nacho Vidal, Cancelo wouldn't represent a massive improvement (Montoya did better in that position last season.)
_____________
Valencia played Zaragoza in the second leg of the Copa Del Rey. Despite being 2-0 up from the first leg, which Zaragoza hadn't taken seriously either, Marcelino played it fairly safe, maybe noticing that Bilbao and Sociedad had both screwed up through complacency and had been eliminated by third level opposition the previous night. 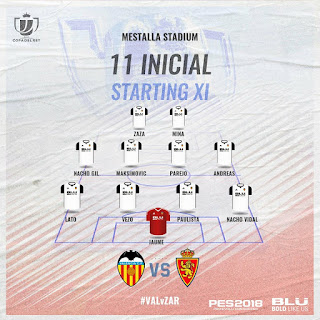 Nacho Gil, Vezo and Maksimovich all got their first starts since the Copa first leg game. Playing both Paulista and Vezo, despite the increasing lack of central defenders and Zaza, despite his knee issues, seemed a bit of a risk, but the team came through it without problems.

Valencia dominated the game, but it took until the 29th minute to make the breakthrough. Mina blocked an attempted clearance and got the bounce in his favour and passed to Zaza, who returned it well for Mina to find the bottom corner.

In the second half, Zaza came close in the 52nd minute, intercepting after a Zaragoza defender was daydreaming, rounding the keeper but unable to finish from a narrow angle. 6 minutes later, he was involved, taking the ball on the right and, when his shot was saved, Mina followed up for his second of the game.

Valencia brought on Soler and Robert for Parejo and Pereira. Robert appeared for the first time in three years and marked it with a goal. Zaza was involved as usual, putting a nice short pass through. Robert still had a bit to do, but managed to shake off two defenders to cut inside and score.

Ferran Torres made his Valencia debut in the 70th minute and marked his debut with an assist, his corner resulting in a rare Ruben Vezo goal. The only negative came a minute later, Nacho Vidal losing his man, who got between him and Paulista to score a consolation. An easy win to take us through 6-1 on aggregate.

In terms of players, Jaume and the defence had little to do. Nacho Vidal didn't help his cause, as he should have done more to prevent their goal.

In midfield, Parejo was Parejo, decent passes but also some lapses. Maksimovich continues to look like a handy back-up player. Pereira has ability but needs to tame his greediness. Nacho Gil could have done better. Robert did well and the few touches from Ferran Torres were good but not enough to form an opinion.

Zaza would be man of the match and, happily, no trouble from the knee was obvious. Mina would be a close second, taking his goals well and continuing to enjoy a good season.

Not sure what it is with us doing much better in the second half but if it produces results, fine.

With Betis joining the list of top flight sides who slipped up, there will be two Segunda clubs and two Segunda B clubs in the last 16 draw, which will take place on Tuesday 5 December. The games will be played on 3 and 10 January.

If you've read this, comments would be appreciated. I'm happy to post news articles, but it's a bit demotivating if no one comments!