Valencia news round up

Quite a bit of non-match write-up news to report, just in case you missed it.

In July 2016 if you'd asked Valencia fans if they'd accept 12m plus Simone Zaza for Paco Alcacer most would have laughed in your face rejecting you. 15 months later that seems like a superb deal. Zaza has been named La Liga player of the month for September, edging out Lionel Messi 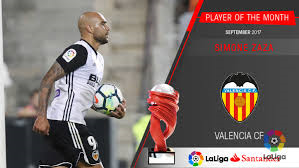 and his award will be presented before tomorrow's game at home against Sevilla.

Valencia confirmed that work will resume shortly on Nou Mestalla. While most Valencia fans will probably ask "what's the point?" in moving from the current stadium near the city centre to a little bit further just to increase the capacity by 5,000, this deal is done and dusted and Valencia have an obligation to be out of the current stadium by 2022.

Rodrigo started for the first time for the Spain side against Albania and opened the scoring with a lovely goal. Unfortunately, he missed several chances and could have had a hat-trick. Whether because of that or not, he wasn't selected for the next game and his chances of making the Spain squad for the next summer hang in the balance. (I wouldn't bet on him being there.) Valencia have to decide sooner rather than later whether to renew his contract which expires in June 2019. Either way better if Valencia renew for an additional year. Superdeporte had a laughable claim recently that Man City had bid 20m plus 15m in incentives for him last summer, which was denied by Marcelino, but the fact is that if he continues to score and appear for Spain, we'd be best off making sure he doesn't leave for peanuts, so a renewal of one-year would be best.

Ferran Torres has been in great form, with Real Madrid and Barcelona sniffing around his 8m release clause which is nothing in today's market. Valencia reacted as they did with Soler, promoting him to the first team and upping his release clause to 25m.

A big question recently has been, can we sign Guedes? Valencia had been linked with Guedes twice. The reaction of Valencia fans was probably either ....
Goncalo Who?
Meh!
Or Meh...meh...meh... Mendes!

25m seemed a lot back then but now seems like a chance missed. Guedes has been great during his time with us and obviously keeping him would be great. The problem is that we have no buy option and every great game he plays ups his value. PSG paid 30m for him with a clause that if they sold him on for 25m or more they would have to pay another 7.5m to Benfica. As a result PSG would probably want 40m at least for him. That is a figure beyond Valencia's means, unless we get a major windfall from selling a player (Cancelo money would go to buying Kondogbia.) I just can't see that happening but another option that has emerged is prolonging Guedes loan until June 2019. That would give Valencia another year to identify a replacement or develop homegrown talents.

Lastly, and self-indulgently, I have to give a big shout out to my friends in the Penya Valencianista de Panama, one of our biggest supporters clubs in The Americas. 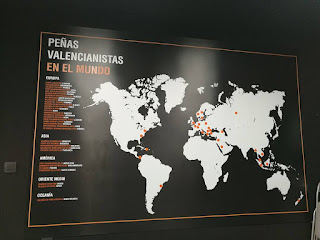 Their national team made next year's world cup for the first time due to an 88th minute home goal at the Rommel Fernandez Stadium. There's a Valencia connection there too. Rommel Fernandez was only the second Panamanian player to play in Europe when he played for Valencia in the 1991-1992 season as a backup striker. He was tragically killed in a car crash the following year while on loan at Albacete. While his time with us was unsuccessful, he does leave behind the legacy of one of only two stadiums in The Americas named after a Valencia player and a small hard core Valencia fan club in a country that is otherwise full of Barca and Real Madrid fans. I'm sure he'd be proud of what his team has achieved this season.

Valencia play Sevilla tomorrow and will be heartened by the 1-5 reverse that Sevilla suffered in Moscow in the Champions league this week.
Posted by John Valenciacf at 8:04 PM
Email ThisBlogThis!Share to TwitterShare to FacebookShare to Pinterest
Labels: news
Newer Post Older Post Home