Another win over a direct rival, with 3 goals scored, including one each for Valencia's increasingly prolific front two and a result which takes us into third place. 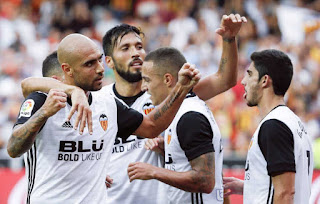 What's not to like? Well, if we're being critical, the second half performance. In fact, the overall performance is a contender for Valencia's worst of the season, which is not to say we played badly, just that the strong start has set a high standard for the team to aim for.

Neto and Montoya returned to the starting line-up and the main question of Kondogbia's replacement was answered. Pereira started rather than Maksimovic and Soler returned to central midfield.

The first 25 minutes were fairly even, with chances for both sides and a few individual errors. Gabriel mucked up a pass in the sixth minute and Neto had to produce a good save. Valencia's best chance came in the 25th minute. Montoya setting up Guedes inside the area and the latter turned well to give himself shooting space but the shot deflected over the bar. Valencia were ahead a minute later after quality play from our midfield. First, Soler tracked back to stop a dangerous counter attack led by Williams and, after winning the ball, found Pereira, who jinked inside creating space for Gaya. His centre found, who else, Zaza who had positioned himself well and slammed home in a manner very similar to his goal against Sociedad.

Zaza would also be involved in Valencia's next attacks which were pure route one football, with balls up field from Neto. The first was headed on by Zaza, finding a great run from Rodrigo, but, from an angle, he was only able to fire straight at the keeper. Shortly after that, there was a carbon copy, Neto to Zaza, who headed on to Rodrigo, who was using his pace to take it round the keeper. The keeper flapped at it, ending up slapping Rodrigo on the head (!) Penalty, converted with ease by Parejo for his first goal of the season.

As I've noted before, Valencia look especially vulnerable after scoring and particularly from set pieces. From a corner, Neto had to produce a superb reaction save to stop Bilbao pulling a goal back. At half time, with a 2-goal lead, Valencia looked to be cruising, however the dynamic changed in the second half.

Bilbao had been forced to rotate due to being in European action on Thursday. Inaki Williams, though a quality player, was struggling a bit as lone striker, so Aduriz and Raul Garcia came on as subs at half time and Bilbao looked much more threatening as a result. After sustained pressure from them, they pulled a goal back in the 58th minute. In fairness it wasn't so much poor defence from Valencia as a moment of brilliance from (who else?) Aduriz, who had a great first touch and turn to evade Gaya and fire across Neto. What is it with that guy? When he played for us, he produced a fairly unimpressive average of 11 goals a season. Against us, he's scored in 7 of the last 8 games!

Valencia really looked on the ropes at this point and the three points started to look unlikely, but we sealed it with a sucker punch from a counter attack. Montoya's floated cross found the onrunning Rodrigo and, with the keeper hesitating, Rodrigo was able to power home a header from the edge of the area. Valencia nearly had a fourth shortly after, with another counter attack putting in Guedes, whose shot was blocked on the line.

To their credit, Bilbao refused to give up and from a free kick, Raul Garcia was able to take advantage of poor marking by us to place a free header past Neto to set up a nervy last 15 minutes. Shaky defending by us, nearly let Raul Garcia equalise in the 80th minute, with another good save by Neto denying them, while Laporta hit the bar with a header a couple of minutes after that, but Valencia managed to hold on.

As with the Sociedad game, not our best performance, but compared to last year, when we would inevitably lose games like this, it's nice to see us holding on against a sustained fight back. We do look vulnerable after scoring, have difficulty dealing with a high press and defending from set pieces, while not as bad as last season, is still an area where we can improve. Overall though, we go into the international break with morale sky high, unbeaten despite a very tricky set of opening fixtures. Compared to this time last year, when we had lost 5 of the opening seven games, that's great progress. If you missed the game, the first half is here and the second here.

PLAYER RATINGS
Neto 7 - a definite upgrade in the goalkeeping front, made at least three great saves to prevent a goal, but seems to have a weakness in the air
Gaya 6.5 - having a good season, was good in defence, especially in the first half and got forward well, struggled more in the second part
Gabriel 5 - off-colour in this game. While his passing overall was satisfactory, he misplaced a couple in dangerous positions and as a defender, just doesn't have that luxury
Garay 6 - satisfactory for most of the game and was the best of our defence in the air, but as with the rest of the defence struggled in the second period
Montoya 6.5 - made some good interceptions in the first period and, for the second game in a row, provided an important assist
Pereira 6 - good and bad, an attacking threat for most of it, decent assist for the first goal but had greedy tendencies and was trying too hard to prove himself
Parejo 6.5 - decent game and good to see him get his first goal, even if from a penalty
Soler 5.5 - seems to alternate between being Superman and the invisible man. Was more of the latter in this game but did play a key role in the first goal
Guedes 6 - got into good positions to score twice but it just didn't happen, put in a good shift overall even if he didn't reach the high of the game before this
Rodrigo 7.5 - was wasted for his first two seasons on the wing. Did a bit better last year as lone front man but is really coming into his own this season as a secondary striker where his running is a lot more purposeful due to his workload being halved. Goals in four consecutive games makes him only the 11th player in Valencia's history to achieve that. Starting to link up well with Zaza too.
Zaza 7.5 - in a real purple patch. Goal and assist in this game, good hold up play, link ups with other players and even gets back the odd time to help out in defence. Far too early (like 2 seasons too early) to speak of him in the same breath as Villa, as some are doing, but he's on the right lines.

SUBS
Maksimovic, Lato and Mina all came on for late cameos but didn't see much of the ball due to pressure at that time from Bilbao, though Maksimovic did make an excellent block soon after coming on.
Posted by John Valenciacf at 1:47 PM
Email ThisBlogThis!Share to TwitterShare to FacebookShare to Pinterest
Labels: match report, player ratings
Newer Post Older Post Home