Did I just dream that? 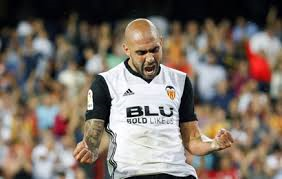 Valencia had got off to a reasonable enough start in La Liga, but questions still remained, especially about the attack, the team's ability to win games and whether, after proving that they could cut it against the top teams, we would resort to business as usual by conceding goals and dropping silly points against the smaller teams. Even at half time in this game, those questions were still open, but in the second half they were blown away, as Malaga were, by Valencia's best performance in a half since the Europa game against Rapid Vienna.

As expected, Marcelino went for a few rotations to give a few players a rest. Nothing radical: Gabriel returned to replace Garay, Lato came in for Gaya, Guedes got his first start instead of Pereira and Zaza started again, this time partnering Mina up front.

Malaga got the slightly better start and indeed, for the first half in general, looked much better than their league position suggested. After the first 5 minutes though, Valencia grew into control and started to looked more confident, patient build up play, great technique passing and touches, generally good defense and dangerous looking counter attacks.

In the seventh minute, we had the ball in the net, but it was ruled offside, Parejo judged to have been offside when he planted the first header. It was marginal, but probably correct. In the 16th minute we did take the lead. Soler controlled a great long ball and put in a decent cross which Mina headed back across goal.

Valencia switched off a little after scoring, something the team will have to work on. Rolon almost put Malaga level a minute later, but Neto produced a great save. Valencia squandered a good chance to make it two, with Zaza the main villain. The defender had just taken it away from him and then it got tangled in his legs, Zaza falling over and appealing for a penalty after a bit of a touch from the keeper. Malaga for their part weren't giving up, there were a few less than perfect clearances from the back, especially from Murillo. Neto had to produce another great save to deny Muro. At half time we led, but they were still in it and would remain so up until our second goal.

That goal came from another great cross from Soler, with Mina, probably luckily, just missing it, allowing Zaza to slide it in at the back post. While two questionable decisions had gone against us, it has to be said, this was in our favour as Mina was offside and interfering.

Malaga fell apart after that, though it helped that our midfield four were giving a superb performance. Parejo held the ball up from another attack and rather than wasting it, waited for the oncoming Montoya. Great cross from him and great diving header from Zaza. The Italian's hattrick came shortly after, Mina pressured the defender well, giving Zaza time to nip in and steal the ball before poking home. What a way to answer his critics. A few days ago there were questions about his ability and relationship with the manager, now he's the second top scorer in La Liga after Messi!

With the game in the bag and a tough game away to high flying Sociedad on Sunday, Marcelino sensibly decided to sub off key players, so Kondogbia, Parejo and Zaza came off for Pereira, Maksimovich and Rodrigo.

Valencia could have won this by 6 or 7 after this point. One of the best counters was led by Guedes, who played in Rodrigo, but Mina was too slow to react to his ball across the goal.

Having seen the other two forwards score, Rodrigo looked totally determined to do it himself and scored our fifth in the 85th minute, linking up well with Guedes, whose great back heel allowed him to slot home. A great win and performance which alleviates many of the doubts. If you'd written a wish list for this as a Valencia fan before the game, you couldn't have improved on it: strong performance, many goals, clean sheet, goals for all the front three. Unbeaten after 5 games, no goals conceded in the first 3 games at Mestalla. Mission accomplished.

PLAYER RATINGS
Neto 8 - Diego who? The decision to replace Alves with this guy has worked out so far. Solid goalkeeping and good distribution.
Lato 7 - the only problem with this guy is the selection issue he gives the coach. Good in defence and dangerous going forward.
Gabriel 6.5 - competent enough performance, early days for him at VCF but so far so good
Murillo 6 - good defending but needs to work on distribution from the back, as we can't have him giving the ball away in dangerous areas as he did tonight a couple of times
Montoya 6.5 - far better than previous game and a great cross for the goal
Guedes 8 - first start and deserves more if he plays like this, always an attacking threat
Kondogbia 7.5 - we absolutely have to exercise the buy option on him. Has added real bite to the midfield and provides the consistency that the erratic Enzo lacked and all without the discipline problems.
Parejo 7.5 - Marcelino has really brought the best out in him, got a deserved round of applause when going off
Soler 8.5 - after a disappointing game last time, was almost my man of the match for this one. Looked like he's been playing as a winger for years.
Mina 6.5 - upped his game after last one, scoring a much needed goal and providing the pressure needed for our fourth
Zaza 9 - ironically up until his first goal, I'd probably have only given him an average rating, but then he produces an 8-minute hat trick. If he can do that more regularly, top four may yet be possible.

SUBS
Pereira 6.5 - solid after coming on, pity he's only on loan
Rodrigo 7 - first time he hasn't started and after seeing his competitors score he put in the effort to do the same. As with them, we need more of this.
Maksimovich 6 - looked a handy player, bit unlucky for him that he'll probably be reduced to a bit role this season
Posted by John Valenciacf at 11:27 PM
Email ThisBlogThis!Share to TwitterShare to FacebookShare to Pinterest
Labels: match report, player ratings
Newer Post Older Post Home