Valencia's tough set of early fixtures continued with an away game against Sociedad, a team that have been a thorn in our side in recent seasons, winning the last four games against us.

Both teams came into the game with contrasting fortunes. R.Sociedad had started strongly with 3 wins but were then brought back down to earth with a home defeat by Real Madrid and a 0-3 defeat at Levante. Valencia meanwhile were coming in on a high. While R.Sociedad had home advantage, Valencia had had 2 days extra rest. While our victory against Malaga was greeted with cheers, the reaction of some of our fans was that it was all well and good to win against a weak team like them, but could we do it against Sociedad? The answer was, yes we could, as the team managed a crucial victory against a direct rival. 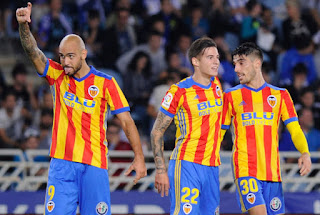 Both teams had conflicting styles, lots of possession for R.Sociedad as they tried to find a way through and Valencia staying solid, with two lines of four limiting the opposition, with quick passing and counter attacks. While Sociedad struggled to find a way through, Valencia had 2 chances in the early period. In the first, Rodrigo tried to shoot from distance when a pass to Parejo in space would have been the better option. Zaza later did the opposite, overhitting his pass to Rodrigo across the goal when he might have tried a shot. Sociedad countered with 2 of their own, the first a counter attack when Guedes took a yellow for the team and the second after a mistake from Gaya put Willian in but Jaume made a good save.

Valencia took the lead after excellent work from Guedes, who sprinted on to a loose ball, dribbled round the keeper and played a clever ball back to Rodrigo for a tap in. Unfortunately, Valencia couldn't hold the lead,as Sociedad equalised from a corner, with Paulista losing his man. Sociedad never looked like scoring from open play but threatened from a free kick at the end of the half, with Jaume making a crucial save. Equal at half time, Valencia had struggled a bit under pressure, with passing from the midfield often going astray, Guedes the exception.

We played a bit better at the start of the second half and took the lead again, Soler threading the ball through to Nacho Vidal, who scored with a neat chip over Rulli. As in the first period, the goal seemed to be the signal for us to turn it down a notch, allowing them to score. Garay didn't clear well and the marking was suspect, with a shot from outside the area beating Jaume. Valencia had a one-man advantage for some minutes, after Zubeldia was sent off for a second yellow and started to push forward more but the passing in this game had been a let down throughout. Marcelino made a triple substitution, leaving Kondogbia on, even though he had a yellow and with the referee being very card happy throughout. It was a gamble which backfired. The ref overlooked a foul which Kondogbia committed which looked like a yellow, but a minute later, sent him off.

It looked like Valencia had squandered the chance to win it, but the team sealed it. Gabriel threaded a cracking pass to Guedes who sped down the wing and put across a precise centre for Zaza to score the winner.

Despite the result, not the best game we've played this season, I mentioned last game how we seem to switch off after scoring and in this game, the passing at times left a lot to be desired, but the team has confirmed itself as a serious contender for top four. Still early days, but what a really good start, especially after the trainwreck at the start of last season.

PLAYER RATINGS
Jaume 6.5 - a few good saves to keep himself in contention for the number one spot
Nacho Vidal 6.5 - while I think Montoya does better in this position, really happy to see another youth product make the breakthrough and well-taken goal too. Should get more games.
Garay 5.5 - not bad, but one of the weaker links and poor clearance led to their second
Gabriel 6 - defensively not as secure as previously
Gaya 6.5 - defensively sound, seemed to have picked up a slight injury at the end
Guedes 8.5 - excellent game, always a threat and incisive passing for 2 of the goals
Parejo 6 - not the force he was in previous games, as the team struggled to retain possession under pressure, limiting his effectiveness
Kondogbia 5 - an off-day, while his interceptions remained good, his passing was wayward in this game and he should have been more careful with tackles especially after getting away without a second yellow
Soler 6.5 - as with the rest of the midfield, struggled to make an impact in the first half, did better in the second and is now one of the top assisters in La Liga
Zaza 7 - another crucial goal and created a couple of chances as well and to think, a week ago we were worrying about our forwards. He has five goals in six games, with only Messi scoring more.
Rodrigo 7 - good game which should go some way to silencing the doubters. This is the first time in his Valencia career he's scored in three consecutive games. Attacked space well and is now jont fourth scorer in La Liga.

SUBS
Lato, Mina and Pereira all unrated. They all came on late in the game and had limited chance to make an impact.
Posted by John Valenciacf at 11:14 PM
Email ThisBlogThis!Share to TwitterShare to FacebookShare to Pinterest
Labels: match report, player ratings
Newer Post Older Post Home