As soon as I saw the Atalanta team walk out onto the pitch I thought that it was going to be a tough game. Their players all looked bigger and stronger than our boys and that is what it seemed for long spells earlier on, men against boys. They seemed able to control the ball well and found the passes a lot better than Valencia and it was no surprise when they went ahead in the 13th minute. A freekick from the left and Toloi easily out jumped our defence to head home.

The tables were turned when in minute 20 a free kick, again from the left was pushed out by the Italian keeper only for Vezo at the rear post to head home levelling the score.  I have to say that it was against the run of play but a goal is a goal. 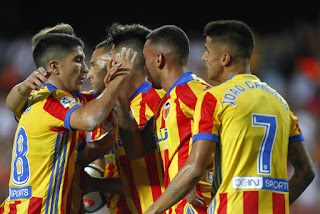 Vezo and Javi Jimemez were the central defenders and Jimenez was showing again what a good and reliable player he is. He made a number of great tackles and looks a real class player. Vezo was doing ok but his ball out of defence was going astray just too many times and just not good enough.

Again Soler was put out wide left and looked totally lost in that position. He kept drifting in leaving big gaps and leaving Gaya exposed too much.  This has to change before next week as there was no player wide for the midfield to pass to.  Cancelo was showing why he is not a defender by having a very good attacking game getting the ball across well a few times and also slicing open the defence himself before firing over with a good opportunity.  Gaya also had what appeared to be a good goal disallowed when he chipped a great through ball over the keeper only to see the linesman raise his flag for offside. Also, he was unlucky when his cross was volleyed over by a Zaza bicycle kick which would have been one of the goals of the season with the great build up play, but it was not to be.

At times Valencia were playing some good passing football when they got the ball down and made numerous opportunities. However it was the same old story when the chances were squandered. Rodrigo made a good opportunity for himself breaking through for a one on one with the keeper but, trying to chip him just passed it into his arms for an easy save.  Other Valencia opportunities came and went. 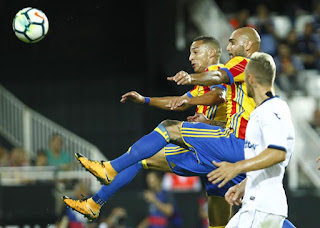 Unfortunately it was Atalanta who had the final word when Palomino had an easy tap in after a corner from the right to give the Italians the final victory. To be fair Valencia improved in the second half with fresh legs but a win was not to be.

Positive performances from Javi Jimenez. If he keeps this up it would be impossible to leave him out for one of the new central defenders who are supposed to be coming.
Cancelo had a good game and if he does go it will have put a little on his value or at least convinced somebody he is worth buying.
Zaza and Rodrigo,   plenty of running but strikers are judged by goals and they didn't get one unfortunately.
Parejo and Medran looked ok in midfield but Soler was awful and it needs sorting. Maksimovic actually looks a good prospect and I liked the way he came on late and took responsibility, taking the ball from Parejo and making good passes.
Santi Mina came on late and I don't want to be a Santi hater but he really looks totally out of his depth this season.

We are getting near the start of the season and just like last year still haven't sorted out the defence.
Posted by Micky Hunter at 1:26 PM
Email ThisBlogThis!Share to TwitterShare to FacebookShare to Pinterest
Newer Post Older Post Home