Welcome back Mr Lim you have brought us good fortune.  With the owners first appearance at the club for over a year it was up to the team to show that his money has not all been wasted. I was a bit concerned that certain sections of the fans would spoil the night with chants against the owner and not concentrate on supporting the team but the fears were unfounded.

With the slightly surprising inclusion of Nacho Vidal in the right of defence with his face mask after the assault by the player of Atalanta last week the team looked the obvious choice. Montoya injured in training allowed him the opportunity.  Players such as Cancelo and Garay included despite their certain transfers next week.


It was Valencia who took the lead in the 22nd minute when a great run by Carlos Soler on the left who rolled he ball to Zaza in oceans of space just outside the area to fire the ball home, much to the relief of the home crowd. The Italian striker had already picked up an early yellow for a bit of an elbow but as usual the ref seemed to ignore similar offences against Valencia. 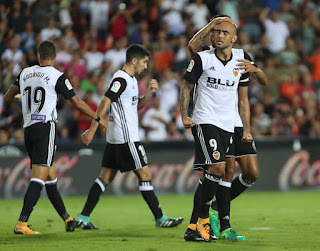 I thought Medran had a good game but its a shame that we have to try and accommodate  Parejo Medran and Soler on the left because he is better in a more central role.  Valencia were bossing the game and chance after chance came and went.  Why are we so afraid of getting our body over the ball and hammering in low and hard shots through players instead too many touches and we lose the ball.

Zaza had a great claim for a penalty turned down. I have only seen it live at the match and have not had chance to see it in slow motion but to me and 34,000 others it looked blatant and one of many strange decisions by the ref. { OK having now seen it on TV, perhaps the ref got it right }  Halilovic was sent off for a high challenge on Gaya after 30 minutes and again not seen it in slow mo. but who cares we are now playing against 10. 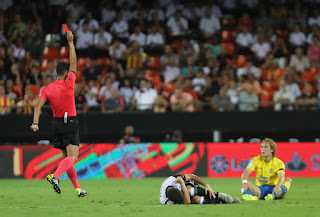 We should really have gone on to win easily but it was not to be and we had to accept the 1.0 win. Three points is three points and a good start to the season. We have to rebuild the defence this week with the visit to Real Madrid on Sunday. Interesting choices to be made.

Conclusion
Not a totally convincing performance but a win is far better than the first game last season that's for sure. I will leave it to you to give your views.  Also good to see us in control until the end and not giving away a silly late goal. There seems more confidence in the team now.


Neto 6   No problems for him and an easy game really.  Not bothered too much but looked confident and handled and distributed well.
Garay 7  Flawless game and obvious why he is wanted by Juventus and Spartak.  Shame he needs to go but looking forward to the new faces.
Gaya 5   Not one of his better games, crosses were going astray too often. He sets a high standard but this was a bit below par.
Vidal 6  Every touch was applauded by the fans, we love to see a home grown doing well.  He made some great runs and defended well. We will forgive a couple of silly mistakes as he is young. A great future with us.
Vezo 6   As we would not get much for him if he left we have to keep him.  He is gaining experience now and apart from the occasional bad ball out defended well. Will be a good stand in.
Soler 5  Not his fault but until he was switched to a more central role late on he looked a bit lost apart from setting up the goal.
Medran 7   This guy is certainly maturing fast by doing the simple things and not trying to be too flashy too often. His passing is really accurate and works well with Parejo.
Parejo 6  Does the good work and is winning more tackles now. He has the crowd and manager on his side and it's improving his play.
Cancelo 6   Playing his more attacking role he made some great runs and great crosses.  We need the money but sorry to see him go and in tears at the final whistle.
Rodrigo 6   Lots of work and lots of running but too many times passes are not accurate enough. He needs some goals for his confidence.
Zaza 7  The match winner,  how can you not love Zaza ?  Works like a horse and scores great goals. Really seems to love the club and the fans love him and see a real passionate player. Just needs to curb his aggression sometimes.