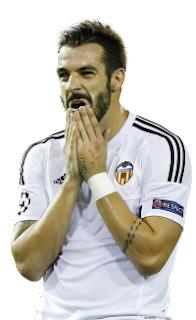 West Bromwich Albion wants Alvaro Negredo which allows Valencia CF a sigh of relief as the club is keen to get rid of the expensive flop and cut his huge salary from the bill. Alvaro Negredo has also stated that he wants to stay in England and play in the Premier league and that going somewhere like China, Russia or Turkey is a no go for him.

So Valencia CF is limited in their ability to whom they can sell him, so having interest at all from England is good, as Negredo has not had a good season for the past 3 years, while his salary is quite huge and the transfer fee would be relatively high in order for Valencia CF to recoup some of the losses on this player.

Unfortunately I think the club went for the wrong target back then, the club could have bought Soldado back from Tottenham for less than 10 million euros, something which Villarreal did and it was a great decision for them.

Roberto Soldado was proven in Valencia CF, so it wouldn't have been tough for him to adapt once again here and provide even better performance than he did at Villarreal.
Posted by SlickR at 8:10 PM
Email ThisBlogThis!Share to TwitterShare to FacebookShare to Pinterest
Labels: news, transfer speculations
Newer Post Older Post Home