Today was a golden opportunity for Valencia to earn a morale boosting win over a team which looks likely to go down, putting to bed any talk of relegation at Valencia's end. The question was, which team would turn up: the one which produced a strong battling win over Real Madrid or the one that produced such a week and limp performance against the other Madrid last weekend? Sadly, it was more of the latter, with a really disappointing performance failing to inspire more than more Peterveteya chants.

There was only one change in the team. Montoya returned from recent injuries and replaced the suspended Enzo. This resulted in a bit of reshuffling. Cancelo moved forward to where we all know he's better. Munir switched to the left wing, Orellana reverted to the centre and Soler dropped back to partner Parejo in Voro's favored double pivot.

Valencia controlled much of the early period, but without threatening a lot. The lack of coordination we saw between various sectors of the team returned. Sure, Gaya was looking his old self bombing down the wing and putting in crosses and Mangala made a couple of timely interceptions but the team as a whole wasn't acting in concert. Up front there was a lack of imagination and creativity, though both Orellana and Zaza missed clear chances in the first half, with both getting booked as well. Zaza played his tenth game, which means that he's now a Valencia player for definite, but today, though he made an effort, it was far from the standard of an 18 million player. He kept getting caught offside too easily. With neither team inspiring, the first half drew to a close.

Valencia had golden opportunities to go in front in the second period. Firstly, from an opposition corner, Orellana raced away, but, one on one with the keeper, shot just wide. Then Valencia got a penalty. As in the Osasuna game, Parejo missed. He may be a good free kick taker, but I think it's high time we gave penalty taking responsibilities to someone else.

Then it was deja vu all over again. We've seen it with frustrating regularity since the end of 2015. Valencia struggle against a side they should be beating easily and then, despite Valencia having the edge, the other team score due to stupid defensive errors. So it was in the case. Inexperienced in a more defensive role, Soler messed up, but still it looked like the chance had passed, however, same as usual, there seemed to be no leadership or coordination at the back. Just look at the picture... 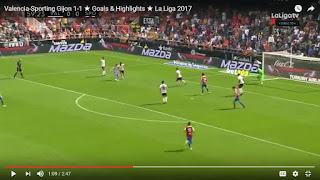 So poor, with so many players marking space unaware of who was around.

Valencia did at least try a bit more after that. Changes were made that should have come earlier, with Mina coming on for Montoya and, later, Bakkali on for Mangala. Valencia pushed hard and got their reward, from a decent cross from the right, Munir produced a looping header which beat the goalkeeper. There may have been a touch of luck about it, but bad as Valencia had been, they didn't deserve to lose against such a weak side.

A long period of injury time followed, with Gijon causing flutters by squandering a good chance to win it. All in all, 1-1 was probably a fair result and that's the problem. Sporting look doomed for the drop and are the type of side that the bigger sides would expect to beat by 3 or 4 at home. Valencia battling to scrape a home draw is far from acceptable. We can talk about luck all we want but for me it's hard to argue that Valencia should be higher than the 13th place we currently occupy. We deserve much, much better than this. Next up Barcelona away and it's hard to be confident after displays like this.

Alves 6.5 - overall had a good game, making decent stops
Gaya 7 - good game, just a shame the attack lacked the strength or foresight to get on the end of his crosses
Garay 5.5 - average and unspectacular game, still expect more for 20 million
Mangala 6 - good first half but then went missing in the second part
Montoya 5 - while it's better to have him at right back, him and Cancelo might as well have been on different teams
Soler 4.5 - wasted and ineffective in a deeper role
Parejo 4 - lacklustre, dwelled too much in possession and failed to provide the telling passes. Needs to be replaced as main penalty taker too.
Munir 4.5 - gets kudos for scoring the goal, but disappointing performance overall, should be rested for Mina or Bakkali
Orellana 4.5 - provided good passes but loses marks for missing two good chances
Cancelo 4 - if Valencia's masterplan for the summer transfer market is selling him for 30 million to fund players in, they should think again. We'd be lucky to get half that. Clearly has talent but has had a disappointing season.
Zaza 5.5 - as always, made an effort, but it wasn't enough. Gets caught offside too easily and was very lucky not to get sent off when he pushed a Gijon player when already on a yellow. Soler was sent off for less last month. Not convinced that we'll get value for money for our 18 million.

SUBS
Mina 5 - good to see him back, but not enough time to make an impact
Bakkali 5 - needs to come on earlier in such situations when we're chasing the game
Posted by John Valenciacf at 8:07 PM
Email ThisBlogThis!Share to TwitterShare to FacebookShare to Pinterest
Labels: match report
Newer Post Older Post Home