In case you haven't heard, Valencia have confirmed the on-loan signing of Simone Zaza, who joins us after an unsuccessful spell at West Ham in which he failed to score in 11 games. 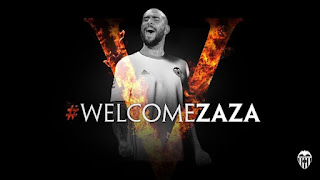 The loan is costing Valencia €2m, while in summer the club will have to pay another €16m plus a possible €2m in bonuses if he plays more than 10 games and Valencia don't get relegated.

This transfer was mooted under Prandelli, but, with the Italian resigning, there seemed to be doubts about it going ahead. Zaza did well in his early years on loan at lower division clubs Viareggio and Ascoli scoring 29 goals in 54 games, but in the 3 and a half seasons since then the stats have gone south, with the player averaging less than a goal every three games before his move to England, less than Rodrigo has averaged this season, as it happens. A combined total of €20m seems a lot for a player who is not a guaranteed goal scorer.

On the plus side, he does bring attributes that the team have lacked up front this season: strong in the air and a physical player, capable of holding the ball up, qualities similar to the departed Negredo. Also, at least in contrast to the latter, Valencia have a try-before-you-buy deal. If he does well, the team can splash the cash. If he doesn't produce the goods, we've at least secured cover for Rodrigo and then can cut our losses by simply benching Zaza in mid-March, close to when Rodrigo is due to return from his injury.

What do you think?

In other news, Vinicius looks set to go on loan at a Segunda side, while the postponed Valencia - Real Madrid game has been confirmed for Wednesday 22 February at 21:00 Central European Time.