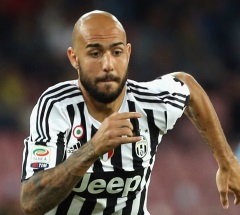 Simone Zaza will be Valencia CF first transfer deal in the winter transfer window, with the player and West Ham United mutually deciding to end his loan there, where he would become Juventus player again and Valencia CF have agreed a loan deal for the player until the end of the current season.

Simone Zaza was purchased by Juventus for 18 million euros, but he didn't make the desired impact at the Torino club, so he was loaned out to West Ham, where his struggles continued as he has not scored a goal for them in 8 matches and if the team plays him a certain number of matches they will have to buy his contract, which West Ham doesn't want to do.

The loan deal between Valencia CF and Juventus is similar, though the price has been substantially lowered to a reported fee of 10 million euros and the number of matches is said to be in the higher region of 16 matches in all competitions.
Posted by SlickR at 1:39 PM
Email ThisBlogThis!Share to TwitterShare to FacebookShare to Pinterest
Labels: news, transfer speculations
Newer Post Older Post Home