Another departure to report. Wilifried Zahibo's contract had expired and he has decided to sign for Segunda side Gimnàstic Tarragona. Zahibo signed for Valencia from Fuenlabrada in January 2014 but spent most of the time in the reserves. He did see some action last season, starting 2 league games and playing five games in the Copa del Rey, one of them as substitute, and scoring his only goal for the club in the Copa game against Granada, though scoring an own goal in the game versus Las Palmas. Ultimately, while he did okay, he never looked likely to develop into anything more than a backup player who would be on the fringes of the side at best, so it's probably best for both the club and him that he continues his career elsewhere, where he will likely get more games. Good luck to him. 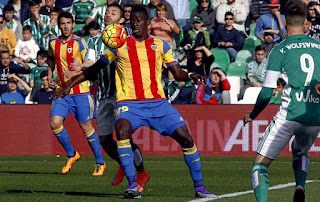