Ibrahim Diallo has left Valencia, rejoining his previous club Eupen of Belgium. Diallo made 4 appearances last season in the Copa Del Rey, but has understandably decided that he's more likely to get regular football in Belgium. 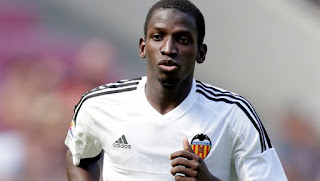 There are a couple of other Mestalla players who may leave soon. Tropi is close to a move to Alcorcón in Segunda. Like Diallo, he's been a bit player at Valencia, making a few appearances as a late substitute. Meanwhile, Zaragoza are interested in signing Nando García, who has never featured in Valencia's first team.

Speaking of the first team, even with the cash from the Gomes transfer, which could ultimately net us 70 million euros, it looks like we'll miss out on Filip Kostić, who looks set to stay in Germany and join Hamburg.

Valencia's second pre-season friendly takes place tonight away to Feyenoord, who should provide a tougher test than Munster did. The game will be available to watch on streaming networks like vipleague and rojadirecta.