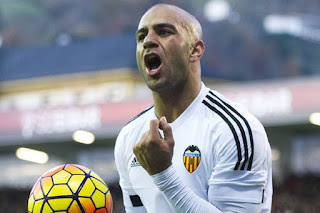 Valencia CF have wanted to sell Aymen Abdennour since the summer begun, and now they might have the chance to do so. With Unai Emery set to take over at PSG he's already asked for few reinforcements to boost his already powerful and successful squad. As a former coach of Valencia CF he's been following the situation with Valencia CF transfers and apparently thinks he can get the best out of Aymen Abennour.

Another interested club seems to be Tottenham who are desperate to strengthen their leaky defense so they can mount another challenge for the Premier league title next season. Tottenham is also coached by a Spanish coach, with Mauricio Pochettino supposedly impressed with what he's seen from the defender and his big physique also fits in with English football.

Would you like to see Aymen sold and with Raul Albiol now a more distant possibility, who would you like to see replace him?
Posted by SlickR at 11:43 PM
Email ThisBlogThis!Share to TwitterShare to FacebookShare to Pinterest
Labels: news
Newer Post Older Post Home