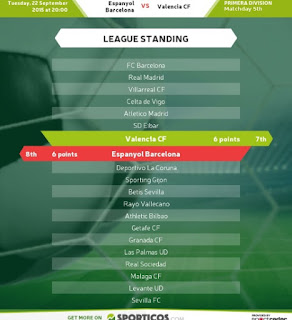 It hasn't even been two days after the last match and Valencia CF already have to face RCD Espanyol at the Cornella-El Prat in what is expected to be yet another tough match.

Valencia CF last match was against the newly promoted Real Betis side at the Mestalla stadium and everyone expected a routine win for Valencia CF, unfortunately the team managed to stumble even against a 10 man Real Betis side for most of the second half and only end the match in a disappointing 0-0 draw. 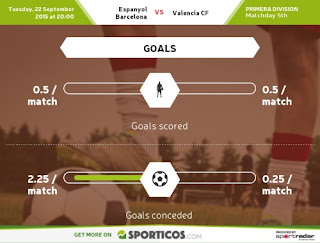 The fans in Spain and international fans are getting frustrated and rightfully so, Valencia CF played 4 La Liga matches against weaker opponents, opponents who are just coming to the 1st division and only managed to win once, drawing three times. This time last year Valencia CF were on a roll, winning games left and right with 3 goals scored per match.

That said its still only four matches in the Spanish league, I bet the 3-2 loss to FC Zenit is playing a big part in the frustrations as well, since that was another loss at home in what is considered a pretty weak group overall, compared to the other Champions League groups. So combined together with the domestic and Uefa league Valencia CF is not doing all that well and its creating a frustration among fans.

Personally I'm not worried YET, I've seen a lot of games, I've watched the team for lots of seasons to know better than to panic or get frustrated so early on, there is still plenty of time and opportunity for the team go bounce back and start getting the necessary results. With that out of the way, it could become critical if the team doesn't bounce back soon though, today is the 5th matchday in La Liga and 5 days later its the second match in the Champions league, these two matches will be crucial and Nuno Santo has to win in at least one to avoid a major crisis. Personally I'd wait how we do up until the 7th or 8th match in the Spanish league and probably the 3rd Champions league match and draw solid conclussions backed by facts from there.

Valencia CF coach Nuno Santo stated that he wants to continue with good defensive showings, he said his goal in this match is to not concede, so keeping with the objectives from the previous match, but this time he's said he wants more lethality in front of goal.

The squad list has also shrunk with several of the players being given a break, while others are out due to supposedly small injuries.

Match Prediction:
RCD Espanyol 0-1 Valencia CF
I've been so wrong in my predictions this season that I don't really know what to predict anymore. Against Betis I predicted 3-0 win and got 0-0 draw, against FC zenit I predicted a 2-1 win and got 3-2 loss, Gijon I predicted a 2-0 win and got it partially right with a 1-0 win, before that got it wrong again against Deportivo, etc...
So I'm just going to go with a conservative prediction, one based on how we've played so far in the season, one based more on reality, rather than the more hopeful and enthusiastic predictions I've had.

I'm expecting another absurdly tough match again, I don't think RCD Espanyol are that good of a team this season, they've certainly conceded their fair share of goals and haven't scored much either, but with Valencia's poor scoring form and just lack of results so far I'd say we'd probably scrap away a minimal 1-0 win.
Posted by SlickR at 7:03 AM
Email ThisBlogThis!Share to TwitterShare to FacebookShare to Pinterest
Labels: match preview
Newer Post Older Post Home