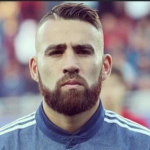 New set of rumors going around the web, this time speculating that Mancheser City are close to signing Nicolas Otamendi for a supposed 40 million fee and a loan deal that would have Mangala head to Valencia CF for one year.

Valencia CF are supposedly fed up with Otamendi's unprofessional acting and trying to force a move that they've put him on the transfer list and are awaiting the best offer for him, with Manchester City taking the opportunity to talk to Valencia CF and inquiring about the player.
Posted by SlickR at 6:33 AM
Email ThisBlogThis!Share to TwitterShare to FacebookShare to Pinterest
Labels: news, transfer speculations
Newer Post Older Post Home