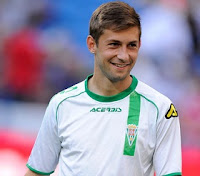 Valencia CF coach Nuno has left out Fede from the squad traveling to China and facing Bayern Munich, suggesting that the player will be sold or loaned out to another club. This is reinforced with the arrival of Bakkali who plays on the right wing, while the other new arrival Mina plays on the left wing, meaning Fede who primarily plays as right wing, though occasionally left wing as well has been pushed out of slots to fit in.

Considering that Valencia CF slashed out money on some of these players they are likely to get the nod ahead of him. Fede impressed last season while on loan, but within 3 matches so far it seems he's failed to impress the coach, which is a shame.

With some of the Valencianista staff, former players and key figures in the club gone, how much importance is going to be put on the Valencia CF youth players? While Peter Lim has taken over and brought financial stability, how much will he and the people he appoints value the academy of young Valencia players?
Posted by SlickR at 1:24 AM
Email ThisBlogThis!Share to TwitterShare to FacebookShare to Pinterest
Labels: news, transfer speculations
Newer Post Older Post Home